Is there any other?

This performance on Friday evening (apparently) was the inaugural performance in Taiwan’s (almost) brand new opera house in Taichung (台中) a bit farther south of Taipei. It’d been ‘opened’ and ‘finished’ then closed, and finally reopened, and what an opening it was. 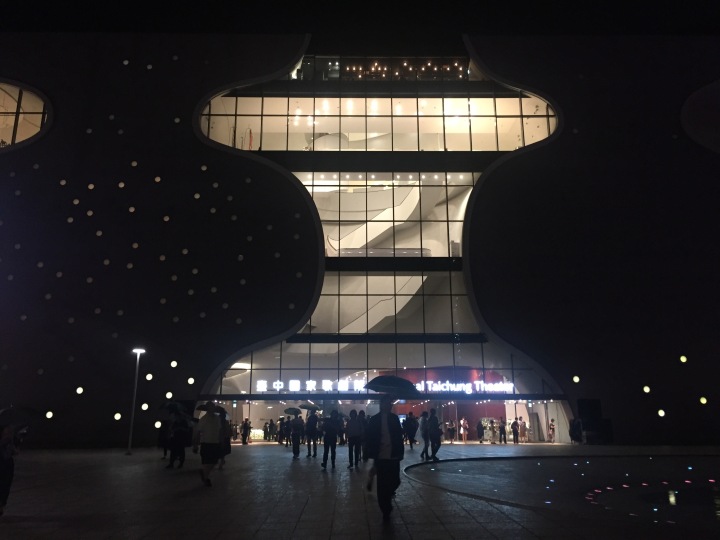 The design of the building is rather striking, not particularly the architectural style I would have chosen but spectacular nonetheless. After having seen mockups and images and icons and marketing stuff that all center around the building’s unique facade, it was especially impressive to be there and see it in person. It was designed by Toyo Ito, and is a phenomenal space for all sorts of events and artistic endeavors beyond just opera.

I got there early on Friday to check it out, and it is, of course, remarkably beautiful. After having only seen pictures of the notable facade, entering the building was nothing short of breathtaking, in the most literal sense possible. Architecturally, it is grand, broad, open, but also intimate and magical. A reviewer described it as like entering some kind of cave, and its giant, natural curving arches and openings are in effect one singular surface, a continuation of the curvatures from the building’s facade.

I’ll be interested to see what the public spaces look like after the opening ceremonies are done, but Friday they were filled with booths and artisans displaying their wares, like an arts festival or craft market, but instead of unruly children and throngs of loud people, it was perused in more the manner you might visit a museum. I’m not sure if those are permanent fixtures or special occasion, but the space very much lends itself to that kind of openness and wandering. There are small pools of water and relaxing elements that make it natural. 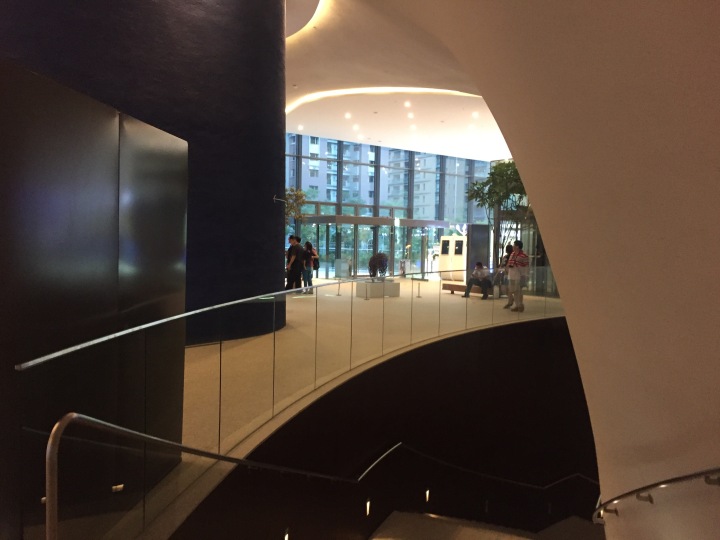 The middle floors were (at least temporarily) off limits for a reception for media and music folk, but the fifth and sixth floors reflect the artistic, welcoming open space of the first, with small shops, installations, and a few restaurants. The fifth floor boasts a fancy-looking prix fixe restaurant serving lunch and dinner, while the sixth has a small but inviting ‘beer play’ bar with a wonderful selection of craft beer, as well as wines and cocktails. This is the focus, as almost all dishes on the menu (aside from a selection of nice Asian-style tapas) are all canned presentations, served with rice and edamame, and almost all seafood: tuna pâté in olive oil, sardines, mackerel, octopus, squid, etc., more like something small to accompany your drinking than an actual meal, but I’m not opposed to it.

There’s also a rooftop garden, which will be delightful when the weather cools down. 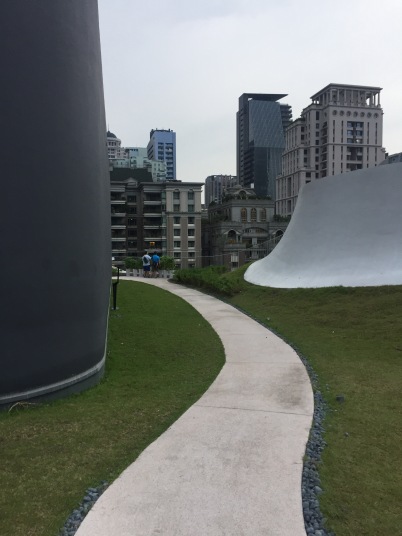 But obviously the star of the show was the show. Architecturally, the place is wonderful, and somewhere I’d love to frequent if it weren’t just a bit too far from Taipei. I’m used to purchasing tickets in our National Concert Hall, and like many concertgoers, likely no longer need the seating chart. I’ve sat just about everywhere there is to sit, and know what seats are good for what. When presented with the seating chart for this opera house, though, on August 1 at noon when tickets were going fast, I panicked, and did the best I could with my budget and an educated guess. G41 something, row 4…

So I’d spent months hoping my seats were decent, and after dinner and a quick potty break, we’re ushered into the crowded masses of (generally more) well dressed people buzzing with excitement to get their (likely) first glimpse of the new facility. I knew we were on the fourth floor, but after climbing flight after flight of stairs, it started to feel like we were getting ready to ride a roller coaster instead of attend an opera. As I climbed higher, so did my anxiety. However, upon entering the hall and seeing our seats, my fears were allayed. We were sitting quite high, but toward the center, quite fantastic seats for my bucks, and speaking of seats… they (at least in the nosebleeds) were a bit hard. The cushion itself was fine, but thin, and that’s not what you want if you’ll be spending the next eighth of your day in one.

I could go on and on and on about glow-in-the-dark synopsis included in the program booklet, the beautiful reds and colors and textures of the hall, or the absolutely palpable excitement about the lights going down, something encouraging to see indeed, with young students of various ages, old folk, couples, all types gathered together for something many would consider outdated. And the low E-flat begins.

I think some people thought it was a tuning exercise, and it was only after the low drone began to build that the audience quieted down and willful suspension of disbelief filled the room like a gas. Although it wasn’t hard. The visuals were incredible.

Okay, so you know the story, and if you don’t you can go read about it. But Wagner, despite his less-popular and more vocal opinions about many things, was kind of an artistic evil mastermind. Even Mozart didn’t write his own libretti. But literally everything, Wagner did, from the story and libretti to the music (obviously), stage design and direction. Oh, he also built the hall in which the works were performed (or at least designed and oversaw it). Mastermind.

And this two-and-a-half-hour drama is merely a prelude to the monstrous three operas that it precedes. It’s such a simple story, really, a straightforward developing of simple ideas surrounding human nature, greed, power, and with a generous dose of irony, the entire thing unfolds beautifully.

And it was played and presented beautifully too. The entire experience was so engaging, so exhilarating (and I had been awake for so long) that it was hard for me to muster the energy to try to find words to express what this production was like.

So take Wagner’s work like a naked mannequin, and onto it dress Cirque de Soleil, complete with 3D visuals and pyrotechnics, everything from upside down hanging humans and human pyramids to Rheinmaidens suspended in clear tanks of water, but all in the style of Kubrick’s 2001: A Space Odyssey and/or a Björk music video, with a little bit of the spirit of, say, Willy Wonka, but never irreverent or cheap. Stunning. Loge rode a Segway for just about the entire show, whizzing around with his two-wheeled contraption shrouded under his white cloak. Thankfully, there are snippets of this production on YouTube, from a performance under Maestro Mehta’s baton in Valencia in 2007. Just watch this!

I could go on and on about the aplomb with which our Maestro directed this performance, the focus and talent of the performers executing such demanding roles from cherry pickers, segways, tanks of water, etc., the beautiful performance from our National Symphony, truly something to be proud of, or the beauty of the opera house, but it truly is something you must have been there to experience.

The amount of minute details of execution, of tiny moments of awe, like when the Rhein (them tanks) was suddenly filled with shimmering, radiant sparkling gold flakes, or how the projected imagery onto a screen between the performers and audience added a (literal) layer of detail to the stage.

I’m no opera connoisseur, for sure, but there are few experiences, few glimpses or little pockets of life where you can leave everything behind, be wrapped up in an engaging, in-your-face performance that takes you somewhere, moves you, affects you physically. It’s a movie, yeah, but it isn’t. It’s performed by real humans in the same room, in real time, and that adds a sometimes terrifying layer of realism to what’s being experienced. There’s no other form of art I’ve experienced that comes close to being as real, as surreal, as a well-executed opera.

Even if the round-trip high speed rail and taxis add to the price of a ticket an uncomfortable additional cost, if this venue is going to be the home of future performances, I’ll have a hard time not journeying down for something so wonderful. 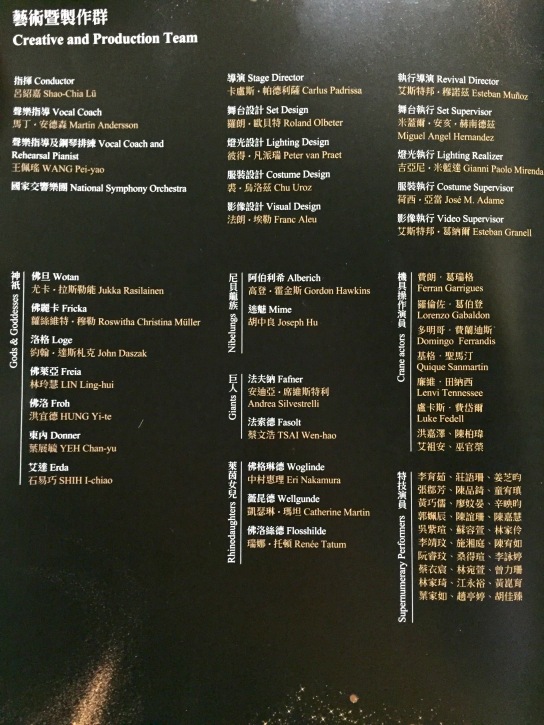