I’m not much for midweek concerts, because they usually involve first running home to care quickly for a dog, then rushing to a concert, then rushing home to get ready for work the next day, but there was no work the next day for this concert, and I was looking forward (almost exclusively) to Tchaikovsky’s Serenade for strings. Having heard the Vienna Philharmonic play it here in Taipei last year was a highlight of my concertgoing experiences that will be difficult to top, but it’s a beautiful piece nonetheless. 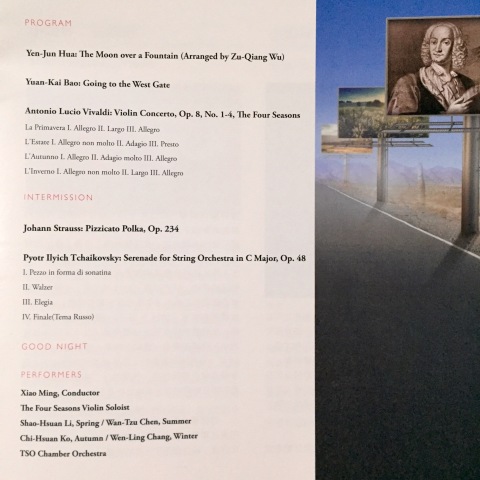 I shan’t say much about the first half of the program. The Vivaldi works were some kind of mix between a concert, show-and-tell, and a fashion show. Each of the four three-movement seasons brought with it a new soloist, each of whom was a young(ish?) local female, all beautifully dressed, and they sounded impressive on paper, with competitions and awards and studied here or there, and they were all quite serious about their solo roles, which is touching, even if they clearly don’t have a ton of stage experience or nerves of steel. One began the tuning process with the pegs instead of the fine tuners, moving back and forth at least a half step in either direction before settling in relatively close to where she started. In any case, it struck me as more an opportunity for the young soloists to gain stage experience than for an average ticket-purchasing audience to enjoy the evening, unless of course you were an acquaintance or family member of said soloists, of which it seems there were not a few. What a great experience for them.

I’ve been to enough TSO concerts (and sat closely enough) to know the faces of the people who sit on the outer rows, principal cello, and a handful of first violins and some cellos, etc. but I recognized very few faces last night. Many of them were much younger than the ensemble I was used to seeing. A closer look at the program lists the “TSO Chamber Orchestra” which is, as far as I can tell, almost an entirely separate ensemble, or was last night, and without even seeing new faces, one could surely hear the difference.

No matter. Strauss’s Pizzicato Polka was a little spot of humor on the program, easing the feeling that there was at least the slightest bit of false advertising for this concert, and then we got to the Tchaikovsky, which really was played quite well. There was a bit of added percussion here and there with the dull clicks and placks of putting on or removing mutes, but overall it was well played.

The highlight of the night, though, which was even able to quell my restlessness to get home, was an encore, of which you may know I am not a fan, generally speaking. After sharing with us his deliberations of whether or not to encore and what it should be, he justified his choice of something quiet, and they played Barber’s Adagio. Exquisitely well. I found myself wishing there would be no applause after, and that we could all observe a small moment of silence as we filed out. Solemn, serious, but stunningly beautiful and clean, very well-executed and a surprisingly nice way to end the evening.

Unfortunately, it seems that that was my final TSO concert for the season, but they’ve already released programs for the first few concerts of the fall, among them being a Bartok Violin concerto (no. 2 I think), as well as Mahler 7! They’re also doing Orff’s Die Kluge later in the autumn, which will be a treat. Stay tuned for more news, as the NSO releases their season program in less than a month (for both of my local readers [or anyone who wants to come visit]).