I said to Webern: for my music you must have time. It does not suit people who have other things to do. But it is in any case a great pleasure to hear one’s pieces played by somebody who has fully mastered them from a technical viewpoint.

The composer, from an article at The Arnold Schoenberg Center

Let me just say that my discussion of this piece in this article is an attempt to introduce it without the need for a score. What I mean by that is it is not an analysis of the intervallic content or pitch-class sets, transformations, thematic material and all the rest. I don’t do that with Beethoven or Brahms, and I won’t do it here. Rather, it’ll be an introduction to the basic ideas in the pieces.

The reason it’s so much more critical here, I feel, is because it’s the very nature of the music. People can listen to the first movement of a Beethoven sonata on Pandora and be perfectly happy, but that’s a bit like licking the sugar-coating off of a lollipop and never biting into the candy, or perhaps more enticingly, licking the salt off the rim and never getting to the margarita. There’s no need to know what’s going on or how it’s happening, what makes the piece tick.

But here, in a work that a large portion of the population would not listen to for pleasure alone, we have ‘six small piano pieces’ boiled down, reduced to their most concentrated, transparent constituent parts, and what’s actually going on?

Well, let me tell you. First, for much more in depth analyses, you could look to this article by Kenneth Hicken, or specifically about no. 2 in Thomas DeLio’s article here. I won’t be going so deep.

The above-liked article at The Arnold Schoenberg Center is a fantastic one, written by Therese Muxeneder. I would like to use basically the whole thing, but just go read the article. The introduction begins thusly:

With their miniature format and extreme aphoristic brevity, these pieces might appear to be a strange and confusing depature [sic] from Schoenberg’s normal concise formulation, but they are wholly symptomatic of the free-tonal form of his works … at this time. […] This might be described as the antithesis of the symphonies of his contemporary Gustav Mahler and also of Schoenberg’s own “Gurrelieder,” a monumental work for orchestra, choir and solo voices that was finished at roughly the same time.

So yeah, they’re outrageously small. But let’s talk for a bit about what my on-and-off music theory teacher would call Schoenberg’s ‘compositional problem.’ He’d already moved away from tonality, in his opus 11 (my article on which completely ignores this milestone of the work, but I will get back to it eventually), building the entire work on certain intervals, gestures, and making those ideas the focus of the piece. For example, in op. 11, the intervals most commonly used (freaking everywhere in the piece) are the half-step and major and minor third. They’re used as the intervals in a melodic line, as well as harmonically, and so it’s not so much the individual pitches (G, B flat, B, for example) that are important, but the ‘intervallic content’ present in that clump of three notes, and those basic ideas are developed throughout the work; everything is related. Below are some of my notes on the first page of op. 11. 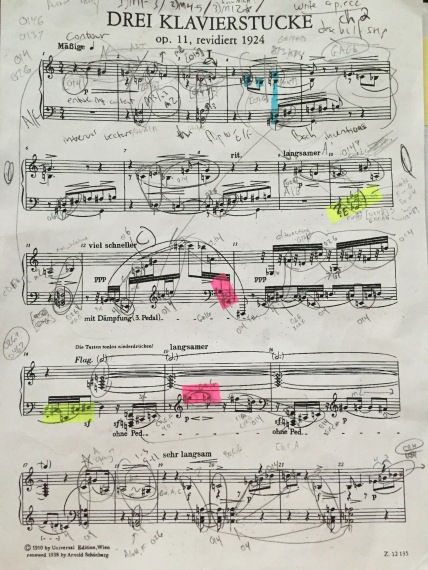 It seems, then, that op. 19 is even more bare-bones than that, taking Schoenberg’s ideas,  these kernels of thought, to new levels of clarity and simplicity. But that’s not to say they’re simple, necessarily. It would take some conscious effort to break them down and identify them. Let’s start with no. 1.

Muxeneder says “This first of the op. 19 pieces is exactly seventeen bars long and consists of melodic nuclei that do not come together into a phrase but are heard one after the other, like disjointed thoughts.” It’s the ‘busiest’ of the bunch, as John Palmer at AllMusic agrees. He points out “Descending lines in the right hand… set against rising gestures in the left” and chords in contrast with single-note passages. Even looking at the score, it has the most squiggly lines. As a testament to the seeming independence of the ‘melodic nuclei’, after the fermata in bar 12, there appears to be a new five-bar, more melodic line that ends seemingly without resolution.

No. 2 is likely the most spoken about. “A quiet, repeated third (G and B), played staccato in an ostinato pattern, contrasts with an angular but legato melody at a higher dynamic level,” says Palmer. It’s so simple. Lots of major thirds, crisp, short G and B, but event he material that it contrasts with is based (it seems) on these intervals of a third.

No. 3 is one of the meatier works, using larger chords, and octaves in the bass. Muxeneder says “the right and left hands develop in independent dynamic frameworks, thus forming a contrast with each other.” This one isn’t as ‘clink’ as the second, which seemed to suggest ‘underpinnings’ of tonality and greater stability.

Muxeneder writes of IV and V that “The next two pieces can be perceived as a combination of recitative and aria.” The sudden outburst of 32-notes at the tenth bar of no. 4 is a repeat of the melodic line that opened the work, apparently one of the only instances of direct repetition, but it ends with “strident chords.”

No. 5 is perhaps one of my favorites of the bunch. Marked etwas rasch, it has a sweeping forward motion and contrapuntal texture in the bare treble and bass, but our major thirds make appearances again in the left hand.

As you can see, I have not analyzed and dissected these works (as I originally intended to do some of), but to put it simply, Schoenberg has taken the barest elements of music, the most fundamental ideas, and condensed the developmental process and ‘storyline’ down to its most fundamental parts.

While these works may seem insignificant in their brevity and bareness of content, it is in fact the same content that could make up a piece of Mahlerian length. Cut to the chase and show what the end result is, with equal amounts of contrast in harmonics, rhythm, dynamics, all the musical ideas.

Finally, after these five short pieces written in one day, there was a sixth added. It is often associated with the death of Schoenberg’s sort-of mentor and colleague, Gustav Mahler. Palmer says “H.H. Stuckenschmidt has characterized the last of the set as representing “the furthest degree of dematerialization of the musical language.”… Two chords open and close this gloomy piece, and at only one point does anything linear intrude.” It was composed a few weeks after Mahler’s funeral.

How profound that something seemingly so simple can have so much meaning.