I just got home. And I’m exhausted. So I probably won’t finish this tonight. 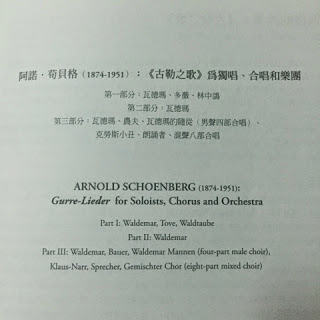 This was the first time I’ve heard a piece anything like this performed live, and while some little bits here and there of the baritone or the soprano may not have been as clear as in a recording, nothing compares to hearing this live. At all. I have some more specific thoughts about it, but let’s get through the last few bits of the heavy lifting and the facts about the piece before I start speculating again.

So, in review, Gurre-Lieder is an enormous cantata (think opera without the acting or staging) based around the love of two people, King Waldemar and his mistress Tove. She dies and a wood dove sings of the tragedy. That’s part one.

Part two consists solely of Waldemar cursing God for the tragedy brought upon Waldemar and how unjust it was for Tove to die (at the queen’s hand, mind you). Part three is Waldemar calling “his dead vassals from their graves.” To continue the quote:

The undead’s restless roaming and savage hunt around the castle at night is thunderously depicted by the male chorus, until the horde, driven by the radiance of the sunrise, recedes back into death’s sleep. During this, a peasant sings of his fear of the eerie army and there is a humorous interlude in the grotesque song of the fool Klaus who is forced to ride with the macabre host when he would rather rest in his grave. A gentle orchestral interlude depicting the light of dawn leads into the melodrama The Summer Wind’s Wild Hunt, a narration about the morning wind, which flows into the mixed-choral conclusion Seht die Sonne! (“See the Sun!”).

So that’s what we have in this piece, and honestly, I’ve listened to it a number of times at home and at the office, and it does seem long. But you know what? When you’re there and  you’re enjoying it and it’s just… mesmerizing, it’s over rather quickly. It’s like a huge feast that you don’t want to end even though you’re stuffed. It’s all too good.
So that’s the very broad gist of the story, and we’ll get later to how I think someone could start to crack into the piece.

A few things were going through my head last night as the performers walked out and the audience clapped them onto the stage. First was “it’s taking a really long time for all these people to come onto the stage.” It’s a big ensemble, and for part one (before the intermission I didn’t know we would have), the choruses didn’t join us. The instant the conductor 呂紹嘉 walked onto the stage, it felt like… it was as good to me as being at the New Years Concert in Vienna. It felt like a real treat, and it was exciting. Both the audience and the stage were packed. They’d built out the stage into the first few rows of the auditorium to accommodate the four harps, two sets of timpani, tons of percussion, and what looked like double of all woodwinds, and tons of strings. It was just an enormous set up, and when the first shimmery sounds came from the violins, it was almost unbelievable… that I am here to hear this live. It was very exciting.

Part 1 is quite straightforward, and despite the enormity of the production, feels at times quite intimate. While the projectors on either side of the stage didn’t scroll through the actual libretto, there were kind of… subtitled annotations, headings for each of the songs and what they were generally about, and that helped. The full libretto was in the program itself, in German and Chinese, the latter of which I read better.

So despite the giant-ness of the piece, if you know generally what’s being ‘discussed’ it’s easy to follow part one. There’s another orchestral passage and then the wood dove comes on, a mezzo-soprano, and in the concert last night, she rocked. Absolutely amazing.
I should say at some point, and here is as good as any, that if Gurre-Lieder were a movie, I probably wouldn’t like it, or at least the first part. I’ve never been one for sappy love stories, epic poetry, or cliche ‘lovers torn apart’ stuff, so… this piece doesn’t get me that way like it may others. I appreciate it more neutrally from a literary standpoint, if that makes any sense. But parts two and three are what really get interesting.

The wood dove song is really heartbreaking and mournful. It would be a good go-to for something kind of instantly satisfactory and standalone from this piece if you’re not ready to sit and digest the whole thing in one go. Part two is the shortest, only one song, and it’s all the king. Quickly then, part three starts, it’s this long part where we really get a lot of contrast. Part one was two people and their love letters, part two was cursing God, and in part three we get everything from dead vassals and spirits charging a castle to a fearful farmer, a fool named Klaus, and a narrator who sings of the morning wind as day breaks.
As mentioned in the previous article, the orchestration and general treatment of the enormous ensemble changes as we near the end of the piece, to a thinner, more intimate sound (in places, obviously not throughout), and these provide true contrast as moments of sorrow or humor. Shattering that quietude, though, is the choruses, which last night.. were literally breathtaking. Even above the roar of the ensemble, the chorus(es) thundered. It was amazing, and you cannot not be moved by something so commanding and powerful, especially in the context of the king leading them in their charge. It was really amazing.

The narrator last night was nothing like the Sprechstimme I was used to from Abbado’s recording with the Vienna Philharmonic, which sounded much more like Pierrot Lunaire than…. normal singing. But the gentleman who gave us the narration in part three balanced the acting with the singing with the energy and mischief (?) of the role, and as the choruses and the orchestra and everything climbed to its final almighty climax, it felt like the sun rising, you could feel it on your face; I had chills through the entire thing. And throughout it all, the maestro was in complete control, 100% at the steering wheel but not overbearing, reaching through space and controlling every necessary detail of the execution. It was all just amazing. 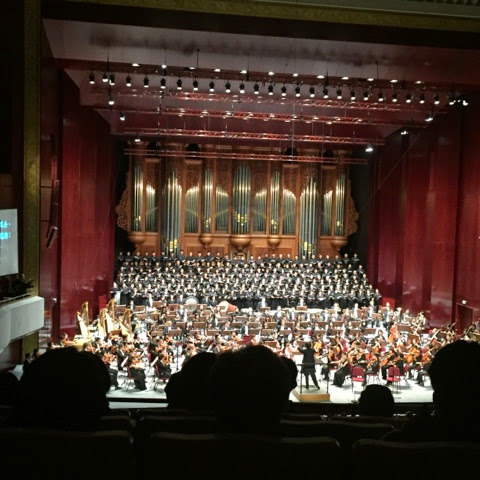 But aside from the truly awesome performance, there were some other things going through my head.

One is…. if Schoenberg really was kind of disillusioned or over the piece and the Romantic idiom and what it all stood for, how can he be compelled to be passionate about completing this piece? Did he really once again find the drive and desire to express himself through this medium, or was it an obligatory stack of homework on his composing desk? If it were the latter, one would think the result would be something plain and uninspired, two words which certainly do not describe this piece. It struck me as interesting.

Secondly, and in a similar vein, was thoughts about what Schoenberg possibly had to prove (or not, or felt he did or didn’t). Many people who like classical music (or think they do because they put Mozart on in the background) are appalled by Schoenberg’s works and atonality, based on serial techniques or not. I would bet that many people who don’t understand what he was doing with music at the time he developed his twelve-tone technique would be inclined to assume he was incapable of writing ‘good’ music, or that he was just a nutcase or generally write him off as incomprehensibly obtuse. But… the choices he made to write things like his op. 11 or 16 or his amazing piano concerto were not…. obligatory, or accidental. They were very very intentional. All that aside, if you don’t believe Schoenberg can write music, or think he turned twelve-tone techniques or atonality because it was some kind of harmonic copout (if there is actually anyone who thinks that), then you need to listen to Gurre-Lieder. I kind of feel like this is him saying (even though I know it’s not) “okay listen, this is me getting all of that out of my system, and if anyone ever doubts my abilities or talents as a musician or composer, just have a look at this piece, this thing I created that is on a scale that hasn’t been done yet (okay, Mahler’s eighth), and with that firmly established, I’m going to go on and do other amazing things.” That’s what it says to me, because when I think Schoenberg, I think of his string quartets and piano works (and that amazing piano concerto!), and not as much this piece. But they’re all amazing.

What I was also interested in was the people around me. Granted, some of them, like me, saw the date and program for this concert months ago and couldn’t get their tickets fast enough, while others had a free night and thought it would be nice to spend it at the symphony (but had obviously planned ahead, because both performances sold out), without much or any knowledge of the piece. I’m curious what someone walking into a piece like this completely unaware of what it really is would think about it. With no context for the piece, no background, no knowledge… would you enjoy it? As a music person, probably yes. As a slightly more pedestrian casual listener of background classical music, it may have been a bit overwhelming or unwieldy. I’m not sure, but there were certainly at least a few people around me who didn’t know what they were in for, and therefore had no idea the privilege they had to be in attendance last night, and a privilege it was. Thank you, NSO, and thank you Mr. Schoenberg.