First, the Hong Kong Sinfonietta is a blissfully talented ensemble who gave us a stunning concert this evening, one of the best I’ve heard in a while. Secondly, I’d like to apologize to them on behalf of the audience tonight for their generally appalling behavior. Now back to our regularly scheduled programming. 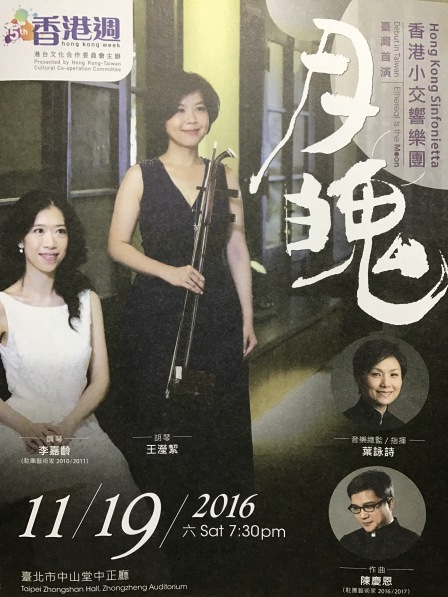 Last night we saw the Taipei Symphony and Pinchas Zuckerman, and tonight was something a little different.

Going to a new restaurant is a gamble, right? New building, everything’s shiny and fancy looking, hopefully well presented, service should be smooth, everyone should have a smile on their faces. But it’s not always a good experience.

The Hong Kong Sinfonietta is by no means brand new, but they’re still young, apparently founded in 1999. My trepidation for buying a ticket to see an ensemble I’d never heard of is similar to that first-time dining experience, though. Tonight was their Taiwan debut, as well as the world premiere of one of the pieces on the program.

I was a little curious about this program, being that it was, as the title says, the orchestra’s debut to Taiwan, which seems a little belated, considering their relative proximity. First on the program this evening was the world premiere of an erhu (二胡) concerto by 陳慶恩, a piece the sinfonietta had commissioned from him. After that was Ravel’s piano concerto in G, followed by Shostakovich’s ninth symphony. Yes, the ninth. That was the draw for the evening.

The concert began with the concerto for erhu and orchestra, but for a number of reasons, it felt much less like a concerto than a symphonic poem with erhu here and there. It’s a small instrument, if you’re unfamiliar with it, and there is zero way it can stand up to the sound of an accompanying orchestra, so they pretty much took turns, the orchestra setting up the backdrop, the atmosphere, then getting out of the way for the soloist to present the key material. The piece was in five movements, with the first, third and fifth carrying both the musical and emotional bulk of the piece, at times very intense, while the second and fourth were more ethereal, with orchestra members singing a softly-held pitch. It was atmospheric, at times more the sound of pure tension than musical, transparent, textured, vivid and colorful, but the audience full of fidgety children and incapable parents ruined quite a bit of the mood of this work, something I’d like to stare at the back of my eyelids in a quiet room and enjoy the soundspace of. It did seem a bit odd to have this back-and-forth dance with the soloist, but overall the soundscape was captivating. As soon as the piece was over, a bald man in the section in front of me leaned into the ear of a mother with two very unruly children and said what I can only imagine to be something quite strong, because he stuck a middle finger in her face as she walked out with her children. I’m not saying the gesture was justified, but people could stand to be a bit more considerate of other paying customers, especially when your children don’t know how to use a chair properly.

After that unfortunate experience, I will admit I had hoped to see many more people leave the hall and not come back for the Ravel. They took a few minutes to get the piano into position and a few shuffles and a retune later, we had Ms. Colleen Lee on stage and were beginning the Ravel.

I’d said (maybe, or I at least thought) that this program was an interesting choice for the orchestra’s Taiwan debut, and I didn’t quite get the connection between the Ravel and the Shostakovich, but I think I do now. If any music ever could be described as effervescent, or carbonated, I’d say the Ravel piano concerto in G qualifies. It’s bubbly, refreshing, light, but not without substance. It’s bright and brisk and refreshing and exciting, and to be honest, not one of my favorite concertos. I’d been blown away recently by the Gershwin, which came on the scene just before this piece did, but the sinfonietta played the life out of it, and Ms. Lee coaxed a sound out of the piano this evening that was crystalline and shimmery, pure and clean, with crisp attack and a supple, delicate touch to the second movement. More impressively, I’d say, was the orchestra’s performance, but we’ll get to that.

Stunning, convincing performance of the Ravel, and a Ravel encore later, and we’re at the intermission. Again, I hope to see people packing their bags, especially the jackass whose pop-song ringtone went off during the encore piece for a solid ten seconds, and the other jackass who got an email as the encore finished. Leave and don’t come back.

After the intermission, everyone comes back and the people who had bought the seat I decided to sit in (next to my regular concertgoing companion) decided not to show up, so the lights went down and I knew I wouldn’t be shooed two rows back to my seat surrounded by misbehaving heathen children and their oblivious parental units.

The Shostakovich was nothing short of superb. And I get it now, the certain connection between these two works. They’re both light and crisp, fluffy and flittery in places, but with splashes and punches of color and sound, flighty terrifying passages of swift or high or long or delicate notes, and the Shostakovich was played with a fresh crispness that let the genius of the work shine. Each of the five movements left me smiling as the pages turned for what came next. I’ll say it’s been quite some time since I’ve heard an orchestra of that caliber, one that plays with such confidence and poise and unity, and who pinpoints the exact heart of a piece and presents it with clarity and understanding.

We also got the gavotte from Prokofiev’s Classical symphony as a small, perfectly dainty smirk of an encore. Just delightful.

The horn solo in the first movement of the Ravel, the sky high one: well executed. The long, exposed bassoon solo in the Shostakovich symphony, really all the pieces (even the erhu concerto) had exposed solo lines, with just about every section of the orchestra getting at least a moment or two to themselves, and they were all executed damn near flawlessly. The overall result, then, was not just a ‘good’ or technically sufficient performance, but a stunning, commanding one, something that left me a little bit in awe walking out the door, and also glad not to be in the hall with those kids anymore.

So, in short, Hong Kong Sinfonietta, I apologize deeply for the behavior of the audience tonight, but it was an impeccable concert; I look very forward to seeing you again, hopefully in our National Concert Hall, playing, well, just about anything. Please come back and visit soon!