We’re coming up on the end of the concert season. I attended my last TSO show last week, and there are only two more left in this season from the NSO, so this began the countdown of the final three.

My initial thoughts were that the Shostakovich aside, it was quite an English program, but we’ll get to that momentarily. He (Shosty) was bookended by Britten and Holst, likely each of those English composers’ most famous and enduring works. 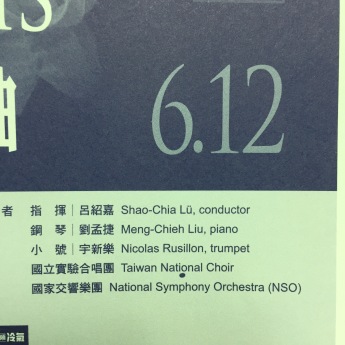 I wondered how long it might take for someone who doesn’t know what Britten’s Young Person’s Guide to the Orchestra is to realize that it’s a pleasant little (this time not narrated) (and actually not so little) tour through the orchestra, as the name would suggest. You’d think there would be lots of soloists, but the sections and instruments perform together, mostly, except for, say, the tuba, who only gets a few poots here and there. It’s an exciting, vibrant piece, and one that is inherently easy to follow for anyone who might not be as attentive to hearing musical structure and all the rest. It’s a bit of a showoff piece, maybe, for the sections of the orchestra, perhaps mostly the woodwinds, since they play in pairs while everyone else plays as part of a larger section, and the NSO did a colorful, vibrant job with the work. It was very nice.

Next was Shostakovich’s first piano concerto, the one that’s more like a double concerto for trumpet and piano that the composer didn’t really commit to being double. The trumpet stands (up and) out as the only wind player in the string orchestra, but it’s still a colorful, expressive piece, very pared down from the Britten, and the pianist did a phenomenal job with the work. It’s as virtuosic as any piano concerto you’d see performed, unmistakably Shostakovich, but more intimate, transparent as a result of the smaller ensemble. There’s a nice smoothness afforded by the trumpet, who at turns can either cool off the atmosphere or increase the tension. Even if it isn’t my favorite concerto (by any account), it’s captivating to see performed live, and, as one might expect from Dmitri, quite intense. We got two encores: Shostakovich’s prelude and fugue no. 15, and a Kapustin etude (op. 40, no. 1), played with fire and emotion, wonderful to see, and even convinced me of the value of an encore here and there. I’m usually not a fan.

The second half was dedicated to The Planets, and was a monstrous orchestra. I’d never seen this piece live before, so I was surprised to see how beefy the ensemble was. Woodwinds mostly in fours, lots of brass, plenty of percussion, instrument doublings, the organ.

Mars made me want to change the order of the piece. It was the live music version of when you turn up your stereo so loud you run the risk of blowing the speakers. While some might have worried about a loss of tone quality, the growl of the brass and the general roar of the orchestra seemed phenomenally fitting for the bringer of war, and I felt like it was a mild shame to let that almighty climax, something bordering on terror, be only the first movement. It was sheer power. The others that followed were wonderful as well. Jupiter was jocose but bold, Saturn felt ‘old’, and the ethereal end of Neptune was wonderful.

It was a packed house, fuller than I’d seen the concert hall in a long time, and many of the audience, it seems, were not regular patrons. As I’ve said before, NSO patrons are polite, respectful, and incredibly well-mannered in concerts, but it seemed to be origami folding or candy taste-testing evening in the concert hall, for all the folding and flipping and crinkling noises that interrupted various (sometimes delicately quiet) parts of the work. That was mildly annoying, but it’s nice to see a full concert hall.

I was curious about which of the works on the program was the big draw for the evening. I thought maybe it was Britten, but I was told that was performed somewhat recently, and that it’s been a while since Planets had been done, mostly because of its size, so that was likely the one. And that got me to thinking about a time when we didn’t have Hubble photos, or the photos from the Apollo missions or landings on Mars or any of the rest of that. How do the ‘portraits’ of the planets hold up in a much more scientifically advanced world of media and sharing and even close-ups of Pluto? Superbly well, it seems, especially when played with such fervor.

(It was raining, and I had to get home quickly, so I left after the first few returns of the conductor, and in the lobby, listening to the applause from the feed inside the hall, it finally stopped, and something else familiar began… Talk about an English evening. We got Elgar’s famous Pomp and Circumstance March, the one I have to imagine the composer rolled his eyes at constantly, wishing his other pieces might get something bordering on equal attention. In any case, it was a rarity to have an orchestral encore piece, but I was able to watch it on a big screen, so I didn’t miss out completely.)