performed by the Melos quartet


So, like the early days with Haydn, we’re still in an early phase of Schubert’s quartet writing. Schubert never lived to be the age Haydn was when he wrote his op. 20 quartets, where we get the feeling he’s really approaching a new level of genius.

These next two quartets are still early in the composer’s young life, but honestly, by this time, in 1813, at the age of 16, would have been about the exact middle of the composer’s life. And the same thing stands as with Haydn: there’s a definite voice, obvious genius, talent, but at least for these two quartets, they feel…. adolescent. I mean to say that they feel interesting but also somewhat awkward in that there are some new, unique things in them (I think) but that they’re maybe not used to greatest effect (yet). Teenagers.

String quartet no. 3, D. 36 is in B flat and cast in four movements. It’s still youthful, and sounds quite classical. From the beginning, there are contrasts presented: longer,  forte notes juxtaposed against short pianissimo notes. It’s not groundbreaking, but it’s what we start with. The exposition with its repeat makes up for more than half of the first movement (I think?), and one of the things that stood out to me was the use of unison (at least rhythmically passages across the entire quartet, sometimes just quarter notes, which is interesting harmonically but pretty common. When they all come together to drive home a long set of 16th note runs or a stronger rhythmic passage, it’s very effective. Especially breathtaking is a series of runs introduced by viola, then joined by violin, cello, until the whole quartet is in step together. 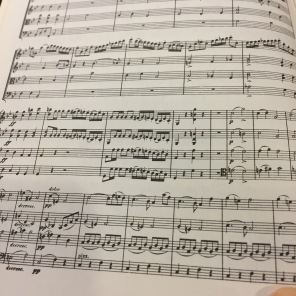 The second movement is also in B flat, and in 6/8, but doesn’t ‘feel’ like 6/8, at least at first, and it isn’t about 20 bars in, with 16th notes in viola and cello that the movement feels, to me, like it has a pulse. This leads to a ‘dolce’ marking at bar 31 after a well-placed pause. The movement is nice enough, but feels a bit uneventful.

The third movement has what the second lacked, to me. It’s not a wild scherzo or anything but a more lively minuet; there’s more use of these ‘stacked’ unison runs and rhythms that’s quite exciting texturally, and this movement is some of the closest music to ‘humor’ in Schubert’s music. While some of the symphonies (with which I’m more familiar) have an air of lightheartedness and freedom, this movement seems genuinely playful, even if just a tiny bit. The trio is dainty, and Melos doesn’t observe some of the repeats, which doesn’t bother me. 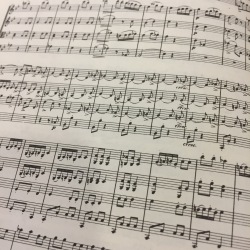 finale is (maybe a rondo?) in 2/2. There are a few Jaws-like moments in the cello that stood out to me, but the piece overall, with all its subjects, seems quite nursery-rhyme-ish. There are more exciting things like runs and some call-and-answer, but it never breaks out into anything too outrageously energized.

Overall, the quartet, I think, is pleasant enough, but there was something simple and unadorned, understated, almost accidentally perfect about his earlier two quartets. While simple and straightforward as they may be, it was much more like he wasn’t consciously making any specific effort, and a sort of tender lyricism shone through, even in the more uneventful of passages. It’s exciting to hear the music getting more complex, developing more, but there’s still some way to go before we get to Death and the Maiden or the Trout.

These works aren’t insignificant by any means, but it might not come as a surprise that they’re played far less than other, later works. Again, their value is in seeing the beginnings of the composer’s genius, getting a ‘behind the scenes’ look, if you will, so even if the latest quartets are the greatest, there’s still plenty to cherish here, even in small ways, and it helps us appreciate and understand the later works that much more. Trajectory, growth, development. This work, as well as tomorrow’s, put that in context. Stay tuned.