I had started this article before the concert with a small introduction and basic thoughts. Scratch it all. But if you don’t get to anything else, look at the program and jump to the subtitle below.

There’s something inexplicably magical about Hélène Grimaud. I’ve been to a lot of concerts, and a bunch of recitals, and I was thinking today as I sat on the second floor (stage level) for the first time in ages that most piano recitals of the past few years will be measured against the recital Jean-Efflam Bavouzet gave a year or two ago. He was stunningly magical, and a joy to speak with.

Grimaud’s presence was entirely different, but equally as captivating. The program was a very interesting one, with water obviously as the main theme for at least most of it. 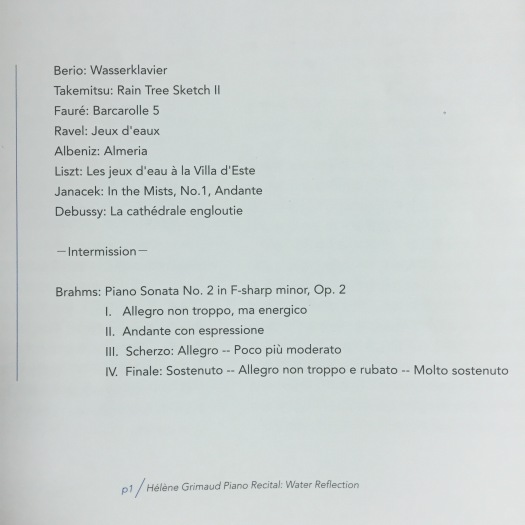 Look at that! What a lineup. And, as we shall see, the word ‘reflection’ is an important one. How poetic.

I wasn’t entirely sure what Brahms’ second sonata had to do with the water theme, but I talked about it just last month, and it’s a nice work. I may prefer it over (the generally accepted as ‘better’) no. 1.

I had people to chat with and greet, but 19:30 rolls around and we settle into a surprisingly-empty concert hall, one of the emptiest in recent memory. This was a bit disappointing. I was hoping Grimaud would get a good turnout. Lights dim, dim some more, and go off entirely, and we are left with an almost jazz-bar type aura: pitch-black concert hall with only glimmering lights of exits and aisles, and one, lone, tightly-focused spotlight on one of the three Steinway D models Grimaud test drove yesterday.

She walks out in a flowy but square Asian-inspired jacket/blouse, gives a pensive, modest, almost shy bow, and takes her place at the piano. Every movement seems calculated yet fluid, as if not to attract any unwanted attention or disturb some continuum. And she was only adjusting the piano bench.

We begin with Berio, a very mellifluous piece to be associated with that name, and it’s a short piece, blending almost DJ-style into the Takemitsu, without pause. This continued through the Fauré, Ravel, Albeniz and on and on, a solid 40 minutes or more (time had stopped, so I wasn’t sure) of music without letup. The most familiar piece on the first half was the Ravel, but at one heard wisps, snapshots of varying voices, as if different sketches of the same still life, from different angles and in different light.

The obvious illustration to be made is water, flowing, bubbling, glistening, at times rushing, gushing, trickling, ebbing, but aside from the more obvious allusion, I’d say snow. Wisps of snow (or autumn leaves) that get whipped up into a small, delicate tornado against the corner of  a school building, dancing through tree limbs and leaving trails like brush strokes in a Van Gogh painting. The wispy, delicate, evanescent nature of much of the music was of a constant motion, a flow, with deeper currents and larger crashes at times, from Liszt or Debussy. The Japanese or Spanish or French qualities of the music were at turns apparent, but with each half-silence, Grimaud swiped her hair behind her ear with a finger, one hand on the piano as if calming a potentially dangerous animal, and began the next ‘scene,’ proceeding to build on the atmosphere that had already been established.

At the half, I asked my fellow concertgoer what she thought. I had my thoughts fully in mind already, but she said something quite similar, yet different from my sentiments. She said ‘it was like we saw a ritual.’ Fascinating, and very well said.

My word was ‘philosophize.’ It was as if the pianist had invited us all to see (yes, very true) a ritual that she performs, as if we could be party to but never engage in this esoteric, highly personal philosophical journey she’d unraveled before us. The experience was a bit head-scratching at first, and I couldn’t help but consider the idea that the no-pauses felt like an attempt to get through the first half of the program without any unnecessary bows, but as the tapestry got bigger, there was an overall picture being built, as if we were watching her inside a hermetically sealed bubble, removed, protected from the real world, but able to gaze into her process, listen to her think, as if the music had not existed before it was played this evening.

As this was all processing, people went to the restroom and folks chatted with folks, and 15-20 minutes later, we are back at our seats. I’m so glad to have recently warmed up to and written about the Brahms sonata, because knowing what I know of it now, it’s clearly the outlier in this magical, ethereal, very liquid program, and stands alone in the second half. It’s German, with its (I find to be) terribly interesting four-movement structure, use of sonata form, theme-and-variations, that incredible scherzo and trio… but not the Impressionist Wassermusik we’d heard earlier.

Grimaud played the hell out of the Brahms, and if you closed your eyes (or even if you didn’t), you could hear a different kind of energy from the first half, a buzzing, almost uncontrollable passion. Grimaud, as a stunningly beautiful, talented French woman, embodied delicate passion in the first half, but this was something different. This was power and force and strength, crunch, but also still somehow… earthy, rustic, youthful, rawly powerful, the way one might imagine the Young Brahms playing for the Schumanns his earliest sonata for piano, almost unruly but not quite.

All the aspects of the Brahms shone through, from the fireworks, thunder-and-lightning opening to the delicacy of the second movement and almost menacing nature of the scherzo, but also in wonderful structural clarity. There were three encores, which recalled the first half of the program and ended on a very… fluid note.

I’m not much for autographs these days. I feel bad for the performers who go from controlling the attention of thousands in a hall to a ‘dance monkey’ autograph signing table, but there was an autograph signing and I had to ask her one question:

Why put the Brahms sonata on the program?

It wasn’t on the Water album, it isn’t in the style of any of the other pieces, and stands alone as a beacon of German Romanticism in the second half of the program. It was played exquisitely, but what’s the connection?

My fellow concertgoer went before me and she’d been warming up as to how to tell the pianist she loved the pieces on the program but also her recording of the Ravel G major concerto. Grimaud’s stare was almost paralyzing. She stopped what she was doing and listened. 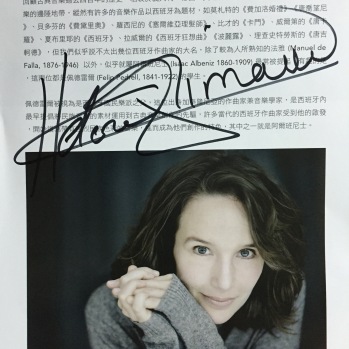 My turn. I don’t know if she was wearing colored contacts or if her aura is just that angelic after having hammered out a few hours of beautiful music, but she was gorgeous, and I may or may not have gasped. As she signed my program, I asked her: “Why Brahms on the program?”

She spoke slowly and clearly, but without a moment’s hesitation, as if she’d clearly given this some thought. I paraphrase:

‘I thought it expressed what the other pieces on the program didn’t. While not inspired by water directly, I think it expresses the violence [or similar word] of nature. I’ve always thought of it as the musical embodiment [I almost think she said ‘testament’] of Zeus.’

That made my week. It was a succinct, perfect, and hugely satisfying answer. I was elated, and mouthed another gushy ‘thank you so much’ as I walked away.

I was speaking with a friend just today about how I’m really not one for recitals unless I know the performer (personally) or something on the program or performer compels me to go see them. I’d much rather hear a soloist in a recital hall with only a few hundred seats instead of a huge concert hall with a few thousand, but you know… the almighty dollar.

There’s no showy pianism or flashy Hollywood fireworks form this French goddess, just an intense, almost too personal focus, a ritualistic, almost spiritual, esoteric narrative that isn’t as much inviting or welcoming (although it’s not not those things) as it is tolerant of onlookers. Even the Brahms, as familiar with it as I was, seemed organic, spontaneous, and as if it was being fed through her brain into her hands by some connection that normal humans don’t have.

On a less cliché note, when I came home to my dog and we had to take a quick potty break in the rain, I thought that if there’s any pianist who you could listen to and say ‘that woman loves wild animals’, it would be Hélène Grimaud. There’s something controlled, powerful, but also wild and passionate about her presence, to say nothing of her playing. A very unique experience, and one I would be very eager to have again.