I went to a concert last night with the recently elected president of Taiwan.

Or we happened to be in the same building.

I got to the concert hall (中山堂, not the National Concert Hall) later than I usually do because I didn’t want to waste part of my evening sitting in an empty hall waiting for the evening to begin, so instead of arriving at 19:00, I arrived at 19:20, ten minutes before the concert was to begin. Even my taxi driver asked why there were so many people. A police officer walked over to the taxi and shooed us away before I’d even gotten out. Taxi drove off, police officer looks scornfully at him.

What’s going on? I told the taxi driver “there’s a concert tonight,” but then I realized that most of the people coming and going and buzzing around the entrances were formally, nay, officially dressed. Police officers and what looked to be like military personnel.

This, as you might imagine, was unsettling. If you’ve been watching the news here lately (or even heard about it from abroad), there have been some disturbing recent events, and I thought maybe this was a crackdown on public locations, national safety, whatever, but the overall atmosphere was almost militaristic. People lined up way out past the doors ten minutes before a show begins. And why? Security checks at the door, cursory as they may have been. It was odd. I ran into a friend and asked what was up. She said “[the new president] is here.” Okay?

Long story short, the concert was pitched as some kind of anniversary/commemoration of some cultural department or something of Taiwan. I’m not terribly concerned with what exactly it was, but there was an introductory speech given in Taiwanese, the local ‘dialect’ (language, not dialect), which I was pretty proud to understand most of, but also a bit miffed that there are political agendas and things happening that I didn’t sign up for. Introductory speech by someone I don’t know, then Tsai walks up to give her speech, surrounded by her crew of bodyguards and security details. Speech given, applause, and then a reminder from the original speech-giver not to clap between movements of the first work since it’s being recorded. A bit patronizing, but a polite plea nonetheless, even asking for a verbal “okay” from the audience, 80% of whom were senior citizens. The big question, then, is…. why is the majority of the program of this anniversary concert made up of American composers? 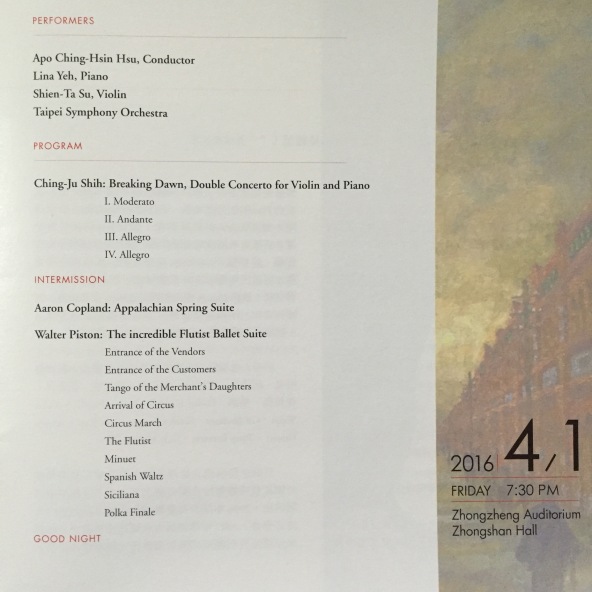 The first work on the program was a double concerto, for piano, violin and orchestra, in four movements. It wasn’t a day past 1880 in its harmonic language, sounding like Diet Brahms with a splash of diluted Rachmaninoff. The first movement’s themes sounded Germanic and pentatonic, respectively, with pizzicato passages. It was an interesting contrast between something quite traditionally classical and something more locally traditional, but never outright quoting or pastiche in its use of what sounded ‘traditionally Asian.’ The second movement was slow, and sounded, really, like lazy Rachmaninoff, mostly featuring the piano, and rich, sweeping strings. I say lazy because it wasn’t as nightmarishly difficult or technical-sounding as something Serge would write. The violin entered, and I must say, while the two movements thus far were quite convincing, the writing for solo violin I found to be uninspiring. I don’t know why.
The third and fourth movements were lively, the third sounding like a scherzo in two, and the final a rondo of some kind. The orchestral writing seemed to be accompaniment at best, and the fourth seemed almost Mozartean in how fresh and light it opened, also having the greatest emotional scope of any of the movements. Overall, it was a solid work, enjoyable to listen to. It didn’t break any new ground, and I was not terribly convinced of the necessity of two soloists or the solo violin part, but one sets aside such criticisms when the young (maybe 40?) woman who wrote the piece walks on stage to take a bow. It’s easy to criticize, but in the end, one remembers that this is something a human crafted on paper, created, and to compare it with Brahms or Beethoven is not only unfair but irrelevant. All things told, it’s a wonderful contribution to the repertoire.

Intermission, then Appalachian Spring. Piano gone, bigger ensemble fills the stage, and our conductor, Apo Hsu re-takes the podium. I’ve never seen anyone with such panache; she walks and moves with purpose, confidence, expression but a strictness and exactness of being. She conducts baton-free, and each gesture is at once fluid and expressive but surgically precise, as if she’s physically holding the music like clay and manipulating it in real-time. She’s a professor at the local university. I’d love to audit her classes.

Copland’s Spring was a drink of cold, fresh, homey water. With the paucity of classical music in my collection fifteen years ago, the Atlanta Symphony’s recording of the work was one of the few things I had that I’d listen to regularly, but it’d been a very, very long time. Rushing back were memories of America, perhaps by suggestion of the name, the Appalachians themselves, hues of sunrises and sunsets, colors and crunches of leaves. There’s no pain or struggle or negativity, just a bucolic, pastoral freeness and warmth of expression. It was nostalgia, and Hsu and the TSO did rich, glistening justice to it.

Next on the program was Piston’s The Incredible Flutist, presenting, obviously, solos by…. oboe and clarinet…. for the first half of the work. No, it’s not a concerto, but a ballet suite. I’d never heard a note of it, but the work was very enjoyable. Think of other 20th century suites, like those from Stravinsky or Bartok, and mellow them out a little bit, Americanize them some. Piston’s work was a delight to hear, even including an audience participation part, of sorts, where the orchestra members cheered and hollered, held their instruments up and asked for the audience to join in a quick celebration, a cellist even standing up to give the conductor a hug and frolic a bit, all in celebration of the appearance of the incredible flutist, at which point the solo happens. This clapping mid-piece and general frivolity confused most of the geriatric gawkers, and many began flipping through the program or asking “what happened?” It was a very exciting end to the concert, and both the double concerto in the first half and Piston’s piece got repeated performances of the last section as an encore of sorts.

Thoughts on politics and police presence at a concert aside, it was a more American-focused concert than any I’ve ever attended in America. The TSO is always a joy to see, and I look forward to enjoying them again soon.