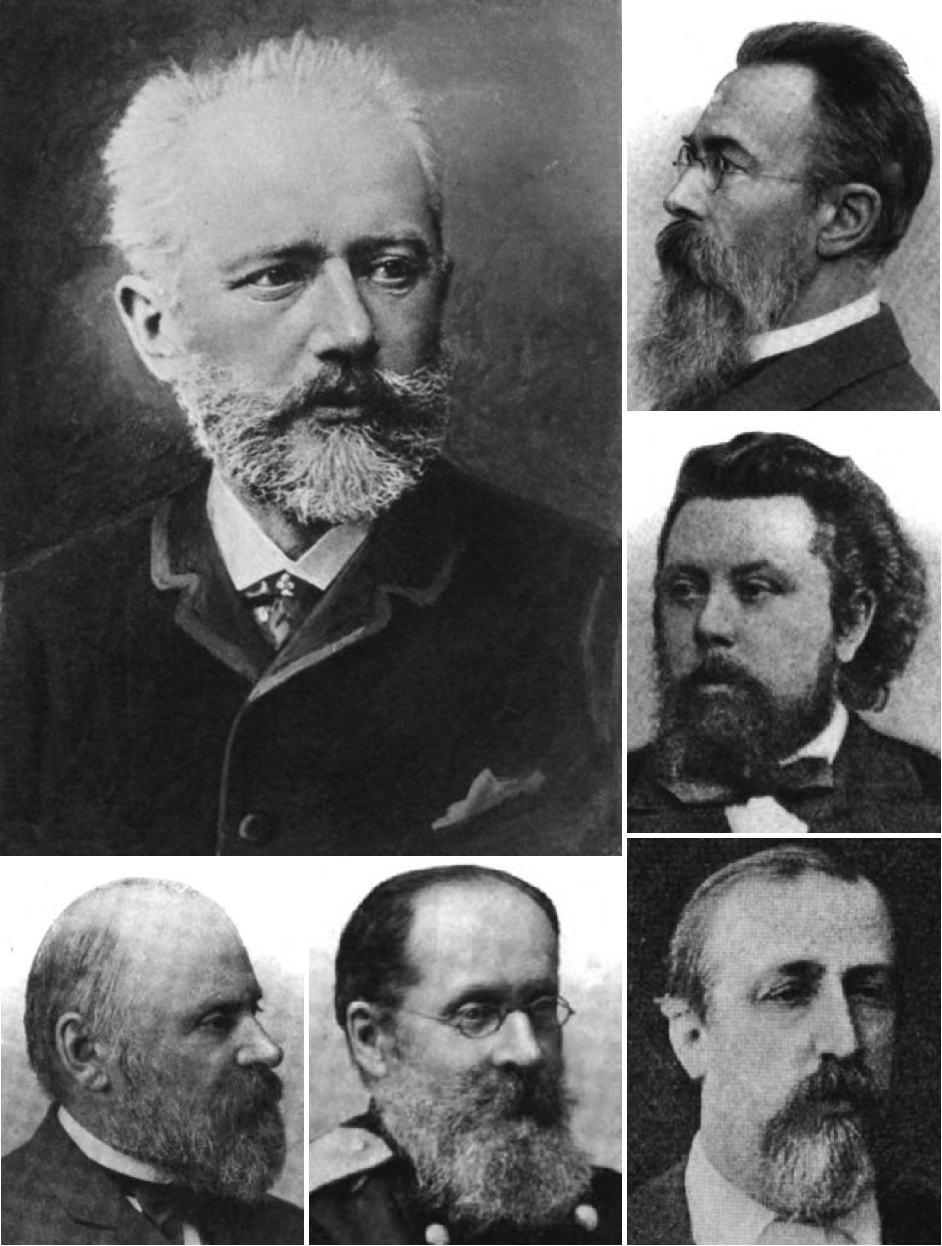 By now, we’ve gone through enough of the history of the previous pieces and composers that we kind of already have an understanding of the climate in which the rest of the composers and their works will be produced.
Nikolai Rimsky-Korsakov was perhaps the most recognized, most famous, most successful (pick one or none) of The Five, Balakirev’s ilk of purposefully Russian composers, but also later became one of the more Western of them, with a focus on counterpoint and classical traditions he studied at the conservatory (as a professor, not a student), even being heavily influenced by Wagner’s operas and the orchestration put to use there. The others were less welcoming of non-Russian influence and culture.
As was briefly referenced in last week’s article, there was another circle of Russian composers united by similar ideals, known as the Belyayev Circle, named after one Mitrofan Belyayev, a music publisher, philanthropist, and (of course) wood dealer. He had musical training from a young age, and later came to know Anatoly Lyadov and Alexander Borodin (a member of The Five whom we will shortly get around to), and they played chamber music throughout Russia.
He met Alexander Glazunov (another composer we shall eventually get to) at the premiere of Glazunov’s first symphony, when he was only 17 years old. He later founded the Glinka prize, awarded annually. Some of the early winners, unsurprisingly, were Balakirev, Rimsky-Korsakov, Tchaikovsky, Cui, and Lyadov. He later established a publishing house for Russian music and published over 2,000 compositions, the first of which was one of Glazunov.

So… with so many of these names being repeated, a focus on Russian themes, and on and on and on, what makes the Belyayev Circle different from The Five? Wikipedia answers:

One important difference between composers in the Belyayev circle and their counterparts in the Five was an acceptance in the necessity of Western-styled academic training; this was an attitude passed down by Rimsky-Korsakov, who taught many of the composers in the circle at the Saint Petersburg Conservatory. While these composers were more open to Western compositional practices and influences, especially through the music of Pyotr Ilyich Tchaikovsky, they closely followed many of the compositional practices of the Five to the point of mannerism, especially in their depiction of folkloric subject matter.

The same but different. While we aren’t focusing necessarily on the Belyayev Circle itself, it is worth mentioning in the context of the influence Tchaikovsky had on the group, as mentioned above. As may be understood based on his work, he gravitated more closely to the ideals of Belyayev’s bunch than Balakirev.
That being said, do recall that he had a very beneficial relationship with Balakirev, helping to get some of his early work noticed and they shared some degree of friendship. Tchaikovsky knew what was good for him; he didn’t buck that system or shun it altogether, but he was never an official member of that crowd. In fact, he came under some criticism from Cui as a student of Rubinstein’s, but his Romeo and Juliet (with Balakirev’s help) and second symphony, ‘The Little Russian’ as well as a favorable review Tchaikovsky wrote of one of Rimsky-Korsakov’s works, earned him a welcome into their circle, despite their academic differences. For what it’s worth, Wikipedia dedicates an entire article on Tchaikovsky’s relationship with The Five, complete with more gorgeous art from Repin, but I must admit to not reading it. The introduction was plenty, and I don’t want to get bogged down in more history I’ll feel compelled to regurgitate. But there it is.
His teacher’s brother, Nikolai Rubinstein, offered him a position at the Moscow Conservatory, and this was perhaps one of the great reasons Tchaikovsky was able to strike such an independent balance between the conservativeness of the conservatory and the more radical ideas of The Five. In fact, when Rimsky-Korsakov was offered the position at the St. Petersburg Conservatory that influenced him so much, it was Tchaikovsky he went to for advice. When RK was coming under persecution for the musical things he was doing that were ‘too German’ or too academic, it was Tchaikovsky who lent him moral support, so although we addressed Rimsky-Korsakov’s first symphony first, the two were rather important contemporaries and it can be said that Tchaikovsky was a mentor of sorts, supporting him in the trail the two of them were blazing for Russian music. Wikipedia says:

In the 1880s, long after the members of The Five had gone their separate ways, another group called the Belyayev circle took up where they left off. Tchaikovsky enjoyed close relations with the leading members of this group—Alexander Glazunov, Anatoly Lyadov and, by then, Rimsky-Korsakov.

And that’s where we pick up with the Belyayev Circle. Belyayev’s Russian Symphony Concerts proved to be important for Tchaikovsky for reasons we will discuss on Thursday. By this time:

Mussorgsky and Borodin had both died, Balakirev had banished himself to the musical sidelines, and Cui’s critical missives had lost much of their sting for Tchaikovsky.[45] Rimsky-Korsakov was the only one left who was fully active as a composer, and much had changed in the intervening years between him and Tchaikovsky as a result of Rimsky-Korsakov’s change in musical values.[45] Tchaikovsky had also changed. More secure as a composer and less isolated personally than he had been in the past, Tchaikovsky enjoyed the company he now kept with Glazunov, Lyadov and Rimsky-Korsakov, and found much to enjoy in their music.

Things settle out, and it is by this time perhaps that a more stable, unified Russianness was attained, arguably from the originally unwelcome influence of less Russian composers (relative to The Five) like Rimsky-Korsakov and Tchaikovsky, whose conservatory training allowed them to balance more widespread ‘Western’ ideals while still maintaining their Russian voices. Tchaikovsky especially felt the responsibility to be Russian in his compositions, and it is maybe his works more than anyone else’s that people think of when they think of a Russian style of music, at least in the Romantic era.
I suppose we should talk more about him as a person.
Born on April 25/May 7 1840 (depending on the calendar) into a military family, he had many siblings and began taking piano lessons at age five. He was also fluent in French and German by the age of six. Overachiever.  He was shipped off to boarding school with the intention of making him a public servant despite his interest in and talent for music. As if being shipped off at the age of ten wasn’t traumatizing enough, his mother died a few years later, when the young Peter was only 14 years old. This affected him for the rest of his life.
Something else that affected him (and Russian music) for the rest of his life was his enrollment for classes at the Russian Musical Society, a program instituted by Tsar Alexander II to create local Russian talent in music. Interestingly, this yet-again Russian focused idea was handed to who seems now like an unlikely candidate, the seemingly over-conservative Anton Rubinstein, who later taught Tchaikovsky at the St. Petersburg Conservatory once it was established. Rubinstein recognized his talent and taught him instrumentation and composition. He later accepted a post at Nikolai (the other) Rubinstein’s request at the Moscow Conservatory.
Tchaikovsky’s training at the St. Petersburg Conservatory, as Wikipedia states:

benefitted Tchaikovsky in two ways. It transformed him into a musical professional, with tools to help him thrive as a composer, and an in-depth exposure to European principles and musical forms gave him a sense that his art was not exclusively Russian or Western.[35] This mindset became important in Tchaikovsky’s reconciliation of Russian and European influences in his compositional style. He believed and attempted to show that both these aspects were “intertwined and mutually dependent”.[36] His efforts became both an inspiration and a starting point for other Russian composers to build their own individual styles.

There was a long period of struggle in Tchaikovsky’s life, the details of which are widely discussed, but later in life, he settled back down and was comforted by greater success and stability. This is about the time the Belyayev Circle comes back into play and he was able to enjoy better relationships with his Russian counterparts before his death. The only name among students of Tchaikovsky that jumps out at me is of a composer who we regretfully will neglect this go-round, one Sergey Taneyev. He wrote four symphonies, but we’re not going to be discussing any of them. Another time, Serge.
Anyway, I am going to make no attempt to discuss the dramatic, tragic, complicated and frankly rather confusing life led by one of the most famous composers in Classical music history. We’ve pretty much just stuck with the details as they pertain to the subject at hand, which, in case you’ve forgotten, is Russian music.
While Tchaikovsky wrote a ton of music, from concertos to symphonies to ballets to operas, chamber music and all the rest, we aren’t even going to talk about his second symphony, ‘The Little Russian’, only the first, ‘Winter Dreams’, which is on the schedule for Thursday. See you then.

One thought on “Tchaikovsky and the Composing Circles”