performed by Robert Taub. The CD is available here

The first of these three pieces is above on YouTube, and if it’s even the
least bit intriguing, I would highly recommend buying the album.

Here we are, at a place I have waited for for a very long time. After yesterday’s kind of all-over-the-place article, we’re finally at the first of Babbitt’s pieces. A year or so ago, I wrote this article as I was beginning to contemplate Babbitt’s work and to be intrigued by it. And now, here we are at the first piece. Again, it’s a bit intimidating to talk about intelligently, but as with Dutilleux last week, I’m going to strike a balance between complete novice and ‘somewhat informed.’ So here we go.
This piece is the earliest of Babbitt’s pieces I’ve heard, written in 1947. Between 1935 and 1946, he had some incomplete pieces (a few orchestral pieces, including a symphony) as well as a Music for the Mass (a mass), a string trio, a musical (Fabulous Voyage). The only piece listed in the year 1947 in Babbitt’s List of Compositions on Wikipedia is the Three Compositions for Piano, but it is easy, as it is with Schoenberg’s op. 11, to consider them three movements of the same work even though the title suggests otherwise. It is rather a similar case here, where the middle movement is quieter and slower, thus hinting at the structure of a three-movement piece.
Regardless, Three Compositions for Piano holds a unique place in the timeline of classical music. It is regarded as one of the first pieces, if not the first piece, to exhibit serial techniques that go beyond the confines of the twelve tone row. That is to say, where more than just pitch is serialized into a row or pattern. It’s difficult, of course, to mark definitively a moment in history when a thing ‘happened’ in classical music (or anywhere) for the first time, but Babbitt’s work here is a very good candidate for the very first totally serial work in musical history, although Wikipedia does give credit to some early adopters: “Ruth Crawford Seeger is credited with extending serial controls to parameters other than pitch and to formal planning as early as 1930–33 (Tick 2001).” One could argue that this was possibly an idea on the brink of invention (or discovery), as there were many people developing and toying with ideas that Schoenberg and Webern and people had started; many detractors would argue against the idea that total serialism was an inevitability, but I would argue that it was. Regardless, Babbitt, as far as I see it, was the first to make that happen.
In any case, let’s take a look at the piece.
Tyler Murphy’s analysis in the paper found here is an excellent resource, and one I will be quoting from heavily because it’s explained in quite simple language and is one of the few resources to be found on this work.  He begins thusly:

Milton Babbitt’s influence on twentieth-century music is unparalleled against many other composers of his time. Being passionate both about music and mathematics, he was able to combine both and create composition with vast amounts of mathematic principles and organization behind them.

Agreed. He continues to describe this work in particular, saying:

This work is organized at the most precise levels, from dynamics and rhythms and their connections with the music, to the combinatorial nature of the work as well. These and much more allow the composition to be maximally diverse.

Um, so… that’s all well and good, and if you’re like me, the idea of structure and cleanliness and logic and form is appealing to an almost unhealthy degree, but it’s quite another thing to listen to the work and try to make sense of what’s going on. A musical genius and close friend of Babbitt’s once told me that the understanding of the mechanics or music theory behind the piece is really irrelevant for listeners, that it’s the result that counts. That is to say, don’t get so preoccupied with the compositional techniques that the composer used that it prevents you from just sitting back and enjoying. I’ll say the inclination to do that with this music is high, since they are essentially one and the same, the product of those techniques and that theory is what you’re hearing. While an understanding of diatonic music (cadences and chords and majors and minors and harmony) helps to explain why music of Haydn and Mozart and Beethoven is all as wonderful as it is, it isn’t necessary to know the theory to enjoy it. That’s essential to remember.
We continue with Murphy’s paper. What is actually going on here? He explains the serialism of the dynamics as follows:

So what we have here is some indication of the structure of the piece (ternary form is hardly a new concept) and the treatment of dynamics within it. What’s interesting, though, is that part of this ABA’ structure is based on serial ideas rather than melodic ones… that is to say, the contrasts are not those of major/minor key that you’d find in, say, Schubert or Mozart, but contrasts in dynamic as well as the treatment of the forms of the row. Beyond this, the essay gets much more technical; I find it all fascinating, but it’s perhaps a bit beyond simple discussion here. Go check it out if you’re interested; I find it fascinating, but I’ve quoted from the article enough already. I love it.
So that’s that for the first movement. Well, wait. In Murphy’s article, there is mention of certain chords (the way I understand it) that kind of mark the seams between one form of the row and another, and there are some very obvious, almost jarring repeated chords with a strong rhythm in this first piece… maybe those carry some significance.
The first piece sounds busy, clanky, but after a few listenings, the ear (both of mine, at least) begins to follow a line that stands out as melodic, as the main subject of the work. The second, in contrast, is much quieter. It begins peacefully and delicately, in great contrast with the hustle and bustle of the first piece. Remember, “maximal diversity,” and here we have it. Aside from some tinkery bits at the top and bottom of the register, I feel this middle piece is the most approachable of the three, not too far removed from, say, (again) Schoenberg or Webern’s works, but obviously more advanced in use of similar techniques.
I feel this work is a strong example of a piece that has a very enjoyable harmonic quality, and that ‘atonal’ music isn’t just a bunch of noise. Keeping in mind the idea of ‘maximal diversity’, we do hear very short, almost ornamental tinkers in the upper register of the piano, but they form kind of a background textural quality for the longer-held more dominant voices of the piece. None of this is accidental. There are a few crisp, clear, and at this point in the piece almost shockingly consonant harmonies right in the middle of the work, and it builds to a climax of sorts. If the meat of the first piece was in its contrapuntal and perpetually busy nature, the real focus of this one is in its slowed down, rich harmonies and more wide open, spacious textures. These works must be very challenging for performers… The work even ends on what feels like some kind of harmonic joke, something suggesting a tonal center.
In any case, it comes to a quiet close, and the third piece begins, much more like the first, except it feels also much more harmonically traditional at the beginning, and quite playful. That opening playful figure builds upon itself until it has developed the texture of the first movement, in a way.
Murphy states in the above paper that the third work is in a rondo form, ABA’CB’A”.
He says of this beginning:

The opening A section is short but holds a lot of important information. In the first measure, the opening aggregate is presented in a series of four trichords, shown below. Setting up the pitches of this movement into this trichordal array will allow Babbitt to continue to try and achieve a maximal diversity and exhaust all possible combinations of the a row and it combinations with other parameters. 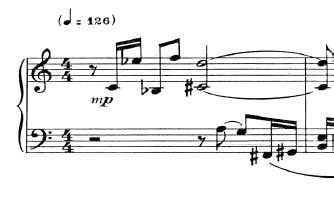 He continues, speaking about the use of the piano to create a four-voice structure. The idea of using four distinct voices in piano is not a new one; we talked about it in Beethoven’s third piano sonata, among others, where the interaction of the different voices plays out almost like the sounds of a string quartet. Murphy says:

The aggregates in the top and bottom voices of the right hand are related by inversion, and the same stands true for the left hand aggregates created. Also important to note is the dynamic lock throughout this section. The whole opening A section is set on a mp dynamic…

It’s this kind of incredible planning and structure that I find so fascinating. Granted, Murphy points out that in this third piece, Babbitt does not stick as strictly to the patterns he’d set in the first piece, using a “free treatment” of elements to achieve the aforementioned maximal diversity.
This point, I feel, is critical in the appreciation of pieces like this. Why?
Because Babbitt was a composer who seemed, perhaps was, a composer far more interested/focused on his music rather than his audience. That is not to say, however, that he didn’t care about his audience, as is often assumed. As I have said many a time, what I find fascinating about Babbitt’s music is that the theory, the science, no matter how complicated and rigorous and difficult, does not get in the way of the art, and Babbitt’s decision to deviate from some of his earlier techniques shows an interest in the end result, the aesthetic of the work, be it to achieve maximal diversity or reach a desired effect.

…he utilizes both serial elements and free treatment of elements to help delineate the form of the work. Whenever he is treating certain elements, such as dynamics or construction of aggregates, in a more free manner, Babbitt is achieving a greater level of diversity in the work because he can combine multiple parameters in multiple ways, which is exactly what he has done in this movement.

So I find a work like this, as small and perhaps unassuming as it is, absolutely mind-boggling in its organization and complexity, how it works on so many levels. The structure (ternary in the first piece and a rondo in the last) are based not just on melodic content, but on dynamics, use of specific forms of the row, certain trichords, etc., such that almost everything falls into place to achieve a desired effect, with no (or very few) loose strings. It’s just an incredible musical Rubik’s Cube of a work. And even if it’s not pretty at first, it can still be awe-inspiring. Listen to it a few times and let this all sink in. We take another step further tomorrow.