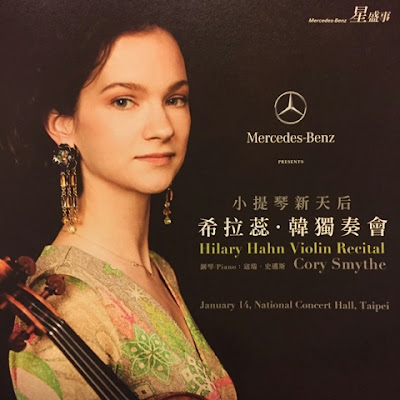 I had all intentions of posting this like, the day after the recital just to try to get in on the buzz of the Asian leg of the tour. I’m not sure where Ms. Hahn is now, but I’m still in Taipei, since I live here, and I thoroughly enjoyed the concert. Deeply. I was impressed and surprised and pleased and regretfully also very overwhelmed by the line for autographs. 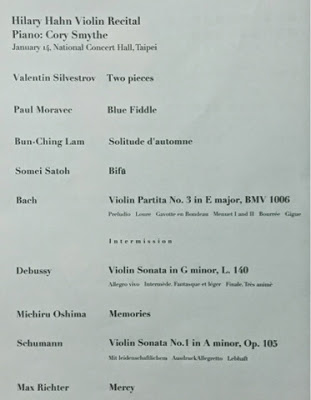 The English and Chinese programs
A few things that I got to thinking of listening to Ms. Hilary Hahn in performance on Wednesday night.
Okay, so the concert itself. The first half contained mostly small pieces, one of which even called for pizzicato piano from Mr. Smythe. I think many people thought there was a problem or something going on with the piano when he stood up and started plucking. Extended technique, friends. Some of the pieces were quite modern, save the Bach piece, of course. It was a treat to hear the pieces she’d commissioned from modern (as in, still alive) composers for her recent album. They were all very enjoyable. Mr. Smythe walked offstage (well, so did Hahn, but came back) and she performed perhaps the most enjoyable piece of the evening, the Bach partita. Really amazing.
The second half was the larger pieces, violin sonatas by Debussy and Schumann (his first). They were both amazing. I mean, really, the whole performance was. But her performance of the Schumann was so inspiring that the audience roared into applause when her bow flew off the violin at the end of the first movement. We’d done a good job of not clapping thus far, but there was lots of clapping… She then continued with the other two movements, and I am pretty sure most of the audience thought that they were the actually the last piece on the program. They weren’t. They were the rest of the Schumann. Only after that came the final piece, Max Richter’s work, which I believe most people then thought was one of the encores, of which there were later two.
In any case, the large substantial works were just as enjoyable as the modern smaller works the artist herself commissioned from contemporary composers, and I was very pleased to hear a selection of them; both encores were also from this selection, one of which was Mark-Anthony Turnage’s Hilary’s Hoedown. It made me smile.
I wasn’t in the mood to stampede out of the hall either before or after the encores to fight my way through a sea of small children (lots of [I will say very well behaved] children in the audience) for an autograph. The thought of waiting in line and the whole thing made me want to crawl in bed (I was coming off a nasty cold), but I will admit I daydreamed a bit about getting her autograph, shaking her hand, or getting a picture taken with her. But by the time I’d realized they had a table set up and roped off for Ms. Hahn, the line for autographs literally spanned two floors and wrapped from one end of the building to the other (as far as I could tell). It wasn’t happening.
I was thoroughly pleased to have been able to attend her performance. Pleasant is the perfect word, and not just in the “it didn’t suck” way, but in a refreshing, satisfying, even surprising and refreshing and inspiring way. Thank you again, Ms. Hahn, and I hope to see you again soon.