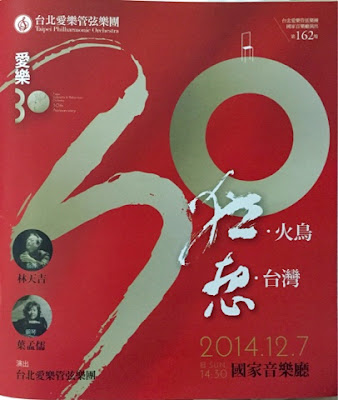 This concert was the day after the previous concert review, the one with Mo. Antoni Wit, and if you look at the two programs, it could also tenuously be called “Paganini Variations Part 2.” 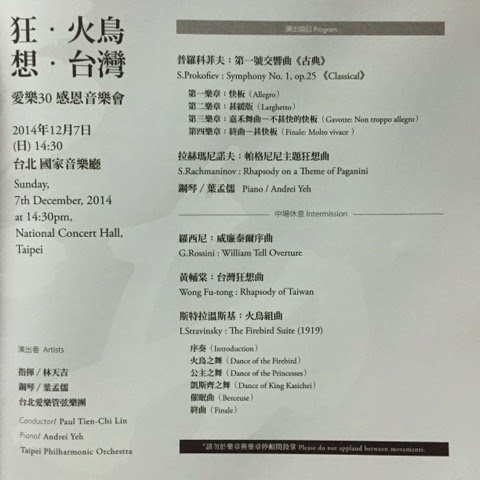 I don’t seem to have recalled hearing the Taipei Philharmonic before.
For clarification’s sake, the previous day’s ensemble is the Taiwan Philharmonic, but only in English. Their Chinese name (國家交響樂團) translates to English as the National Symphony Orchestra. You can see how that may be confusing, but in any case, they’re different. I expressed in that article my continued and growing adoration for the NSO, as every performance of theirs I’ve been to has been absolutely exquisite (Mahler’s ninth, the Eastern European concert, and a recent New Years performance of Gurre-Lieder).
I am less familiar with the Taipei Philharmonic, but was eager to attend. The program was on a Sunday afternoon and I had time, and the program was a fun one, nothing too dramatic or
heavy. It’s (almost) all stuff I’d heard live before, with the exception of one I was very much looking forward to.
Unfortunately, some stuck up rich old grandparents brought their incredibly spoiled and misbehaving grandchildren to the event, sat in the best seats in the house and talked through the entire damn thing.
The piece I was looking the most forward to was the first one, Prokofiev’s first symphony, which we’ve talked about before. While it is, standalone, a very well-written work, in my opinion (some criticize the orchestration or other things), it’s a perfect example of neoclassical work at its extreme, to the point of being a musical caricature of everything from the classical era. It’s full of tongue-in-cheek jokes, cliches, and just general fun.
Granted, I’m used to Serge Koussevitzky’s breakneck-paced rendition from decades ago with the Boston Symphony, the whole thing being played in less than twelve minutes. Some people may not care for something so fast, because it is more difficult to appreciate the finer points of the piece, but to me, anything much slower than his rendition comes off as languid to me, and that’s rather what this live performance ended up feeling like. The first three movements were conducted with all the drama and pomp necessary to conduct Don Giovanni or something. It felt heavy, serious, and torpid. I am reminded that this is just a stylistic or technical decision, but it does go against everything I feel this piece represents. That being said, it was like watching a replay in slow-motion. All the details were that much clearer, and you could see it unfolding before your eyes and spend more time analyzing (but not really savoring) each individual moment (since the overall motion of the piece, I feel, was lost). The fourth movement, though, was a bit closer to the romping fast almost celebratory jingle-bell ish fun kind of nature I was so hoping for. But even here, the articulation of repeated notes and the general energy and speed seemed to be a bit of a challenge, and some of the crispness was lost. Now, I know they’re not the Boston symphony, and I feel even the London Symphony’s recording under one Valery Gergiev has its weaknesses here. The movement needs to feel like its out-of-control-fast while still being perfect metered, crisp, clean, and even polite and cordial. Meh. I was somewhat disappointed. Everything else, with the exception of the Taiwanese piece, I’d heard live before.
After what I felt to be a bit of a misstep, I didn’t know what to expect with the rest of it. A gentleman with curly unrestrained hair and what looked from my seat in the balcony to be a tacky, shiny suit with rhinestone cufflinks rather ambled out on stage after the Steinway had been rolled out, and he bowed and took his position at the piano. I know this all sounds quite critical, but I had no idea who this guy was, and he looked a bit like he’d just woken up. I’d heard an absolutely stunning performance of Lutosławski’s Paganini variations the night before, a piece I was wholly unfamiliar with except for the fact that it obviously shares content with Rachmaninoff’s far more familiar piece. I was skeptical.
And then I was blown away. This guy, whoever he was (never heard of him before) was absolutely amazing. Turns out his name is Andrei Yeh (葉孟儒) and he’s incredible. Aside from his stomping and tapping of his shiny leather shoes throughout his performance, it was beyond perfect. It was stunning. Excitingly, I will be seeing him in a solo recital next month of an all-Scriabin program. I can’t wait.
The next piece (after encores and an intermission) was the William Tell Overture. Yes, the Lone Ranger theme. Wikipedia mentions a quote I thought of (that is apparently attributed to multiple people):

Its most famous use in that respect is as the theme music for The Lone Ranger, so famous that the term “intellectual” has been defined as “a man who can listen to the William Tell Overture without thinking of the Lone Ranger.”

Anyway, it’s perhaps cliche and overdone, but it’s damn fun music. I smiled throughout the whole thing. You can’t not enjoy it every now and then.
The next piece, Rhapsody of Taiwan, I have zero recollection of, which probably means I didn’t hate it.
Lastly was Stravinsky’s Firebird, which I hadn’t listened to in a long time, and thankfully gave a few listens to before the concert, because the entire performance was ruined by some spoiled, unmannered rich kids who don’t know how to behave themselves in public and grandparents who are too old or incompetent to discipline said brats. They talked and giggled though the whole thing. They were sitting on my row, like two sections away (quite a distance), so I’m surprised that someone closer to them wasn’t more perturbed than I was and that they didn’t get a telling off. Also, the ushers, who usually have eyes like hawks and a keen ear for disturbance, were disappointingly not present that day. In any case, the piece itself is a beauty, with lots of highs and lows and contrasts, and I was frankly too irritated by the constant chatter to really appreciate the piece, but they did a fine enough job with it. It was good.
It was kind of nice to hear two separate Paganini variations in the same weekend; it was interesting to see what can be done with the same basic music to such different effect. I can also say that, performance quality aside, the NSO concert of music I was almost entirely unfamiliar with was unexpectedly far more pleasurable and enjoyable than a program of music that I knew almost from beginning to end. Part of that was the annoyance of the crowd on Sunday, and the disappointing interpretation of the Prokofiev piece, so maybe it’s a conflict between reality and expectations, but I was still glad I went, and I am looking very forward to the Scriabin recital next month, which will of course get its time here. That’s a little less than a month away, and as you will see, is quite timely.