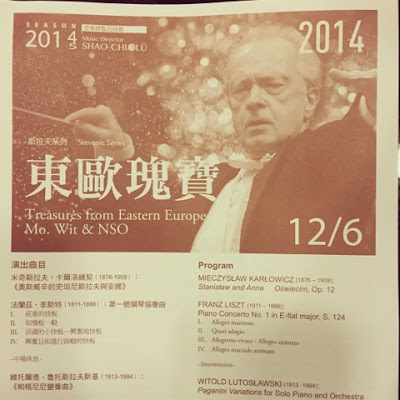 I have pretty much fallen in love with our biggest symphony orchestra, the National Symphony Orchestra (translated from the Chinese: 國家交響樂團, but more often referred to in English as the Taiwan Philharmonic). I’d heard them in the past, but the real moment was hearing them perform Mahler’s ninth back in September. It was… almost spiritual. Just wonderful, and so I’ve been eager to attend as many of their performances as possible. This performance was the orchestra I’d come to love with a special guest conductor. Just as 呂紹嘉 seemed perfectly at home conducting Mahler and Schoenberg after his studies and work in Austria, Maestro Antoni Wit was joining the NSO to conduct a program of pieces from Eastern Europe. Now, they weren’t all Slavic, as you shall see. Liszt’s first piano concerto is included, which I’ve seen a few times by this point, and he is (obviously) Hungarian, but the other names are obviously, crunchily, wholly Slavic: Karłowicz, Lutosławski, and Janáček. Yeah.
I’ll be the first to admit I should have written this much earlier. It took place over a month ago, on December 6, 2014. Aside from the Liszt concerto, I hadn’t heard any of the other pieces, and there’s always that debate of… should I go and listen first or not? It was easily decided with the Karłowicz piece, as I couldn’t seem to find anything of it online. I didn’t look up the Lutosławski piece because I figure I’ll know something of it (Paganini variations), and the one that intrigued me most was the Sinfonietta. I’d heard people praise this piece, but I’d never heard it. So I think I snuck a bit of a listen.

But one of the primary reasons I was so eager to attend was also because of Mo. Wit. I’d heard his recording of Mahler’s eighth a number of times, the one here with the Warsaw National Philharmonic and lots of other people, and I was impressed. A lot. So it was really cool to think…. that he’ll be here, and I’ll see him (and hear him, or sort of), and it will be great. Also, I looked up videos on YouTube of interviews with him, and I found this one, and he seems like a super nice dude:

Even though it’s unrelated to any of the works or composers that were on the program, it was still informative to see him express himself and talk about his craft.
I recall the Karłowicz piece being quite enjoyable for a first listen. Perhaps I should
mention at this point that the pianist for the Liszt concerto was the very tall Peter Jablonski. He’s part Polish, if you can’t tell. Clean, crystalline performance of the Liszt, with lots of energy and color. But I’ve heard it before and it wasn’t the real reason I came. While I’m really familiar with the Liszt and could see how his performance differed from the ones I am accustomed to, it didn’t blow me away. What I really enjoyed, and what really seemed impassioned and inspired, was the Lutosławski Paganini variations. Check it out.
As explained in the video, Lutosławski wrote his Paganini variations a few years after Rachmaninoff did, but under quite different circumstances. The anchor (lady?) in the video explains it perfectly well, so just watch the video, but basically Lutosławski and Panufnik wrote a few hundred piano duets that were destroyed in the war, the only surviving one being this work, which he later expanded from a two-piano version to the piano and orchestra version which I heard performed and which is performed above. It was stunningly energetic, virtuosic, playful, ominous, beautiful, mischievous, very modern and quite familiar all at the same time. I really quite enjoyed it.
The real treat of the evening, however, was the Sinfonietta. The small army of additional brass walked on stage, which is an indication of the nature of the opening (and closing) of the work even if you haven’t heard it before. I’m not much for military band, or brass band, or any of that, but this piece carries a wonderful balance of somberness, celebration, expression, power, and emotion. The textures and harmonies are interesting and never boring, and it was performed, unsurprisingly, stunningly well. The stage itself carries quite a commanding presence with the few dozen brass instruments on stage. The ensemble sparkles a lot more that way, but the opening was so sonorous and confident as to be captivating. I really loved the piece, and will definitely get around to writing about it at some point. 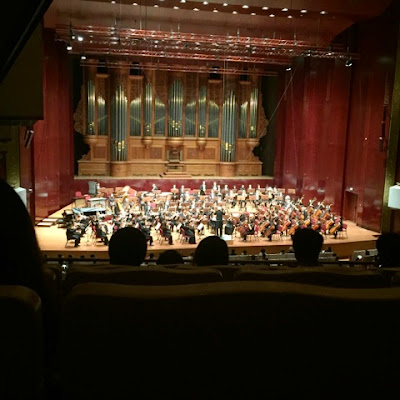 The thing I was so pleased by in this concert was not just stunning performances of pleasantly enjoyable new music, or a virtuosic performance of a piano piece (or two), but the confidence, the assurance that we have here a wonderfully professional, high caliber orchestra, world-class, I’d say, and that every performance I’ve been to of theirs has been not just good, not just as it should be, but wonderful, a real treat, one that always seems a bit too short. Be it the orchestra and their very own principal conductor or a guest in town, you’re assured to have a wonderful, unique performance, one that makes me as a patron eager to attend every performance of theirs, regardless of the program, because you know it’s worth it.