(aka This century part 2: The modern experience)

In part two, we’ll be discussing the actual concert that kind of got me to thinking about all this to begin with. I was invited sort of last minute (actually about a week ahead of time) by a friend of my piano teacher’s (who is/will be my music theory/composition teacher) to attend this concert on a Saturday evening. I vaguely remember seeing it listed in December’s program, but it was a two-night thing, and I was unavailable the first night, so I didn’t give it a second look. The main reason, though, was because the program wasn’t listed.
Turns out friend/teacher had really cheap tickets and so I decided I would definitely go. This second night was in the recital hall downstairs, not the big concert hall upstairs. It’s a small, cozy, but very handsome, warm building, very intimate. It seats perhaps 300. My seats weren’t spectacular, but there really aren’t any bad seats. I’ve only attended a handful of events here, the others all being piano recitals, so this was the first chamber performance. 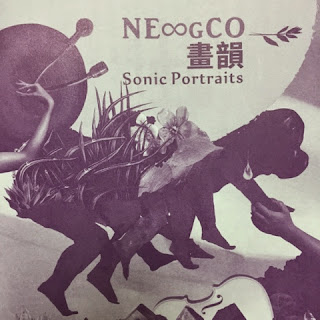 And let me say… it was all fantastically foreign. The musicians were spectacular. It was the Nieuw Ensemble Amsterdam and The Little Giant Chinese Chamber Orchestra and a number of different ensembles and instrumentations of Chinese or other Asian instruments. The pieces varied from Western orchestrations like the
Ferneyhough piece, a trio of clarinet, oboe and piccolo, to much larger ensembles made mostly of Asian stringed and wind instruments with the composer as soloist, also ‘singing’ throughout the piece. 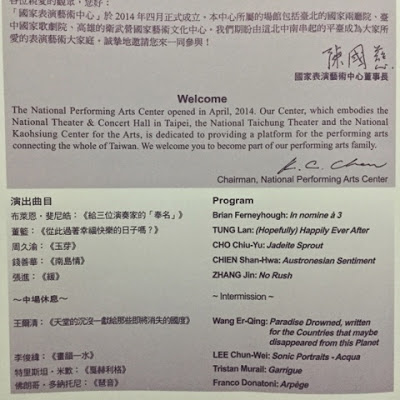 They were all quite interesting, and the program notes for each piece (in Chinese) were insightful. I was most intrigued by the notes to Tristan Murail’s piece, but came to find the piece itself was nothing like what the program notes had painted in my mind.
And to be quite honest, that was the gist of the whole performance. There was not a single thing, not one bar, not a beat or a moment that was anything like anything I’d ever heard before. If there were similar concepts to the music I am accustomed to listening to, like tonality… or even twelve tone systems, I couldn’t pick them out. Each piece was, in its own way, a fabric of unfamiliar voices, a sea of sounds that was difficult to navigate mentally, but nonetheless provided much to think about.
One of the pieces (the one with the largest instrumentation) was almost solely Chinese instruments, with a soloist (almost a Chinese concerto for singing erhu player, I guess), was in many ways far more a performance piece (as in one of acting and drama) than just music.
And I have to say… as someone who is not accustomed to or at this point even inclined to listen to such modern music, it was a stretch for me to think of ways to process it. It felt like…

but then, Ferneyhough’s piece was probably one of the most enjoyable of the evening (and the shortest, by far). I had to think of it more as purely expression of emotion, of audible thought rather than music. And that’s not to be negative about it or say it is inferior in any way. It’s for sure not what I care to listen to, but it was interesting. The program notes helped to put it in context, and I found myself relying on them far more because they were the only thing I could relate to (words!) for any information about what this piece was or how it was supposed to … to be.
At the half, I had heard enough to share my sentiments with the teacher/friend (not a music teacher or a professor, but a young music student in his first or second year at the same university as my piano teacher, also a student) when he came over during the intermission. He asked me what I thought, and I had a quick look around to try to see if there was anyone around I might offend (we’ll get to that later), but my sentiment was this. If they had had CDs outside the recital hall for sale of any of the performances of the pieces, I would not buy one, and if I did, just as a souvenir, I’d probably never listen to it, but I am still glad I came to be able to experience this live. In that respect, it was very fulfilling, even if I can truly say I didn’t enjoy the music as I normally would hope to.
The other thing about it was that, even before the program started, just listening to the chatter and watching people walk in and congregate, it was easy to tell that it wasn’t your average audience. These were academics: music students, professors, former students, friends of the performers, etc. Aside from some perhaps unwitting ticket purchasers, it seemed that the program would only attract the more ‘hardcore’ of audience members; many of the students gathered together, some even had instruments in hand from rehearsal. Professors were there, talking about upcoming performances, or curriculum and what have you, and it was only later that I realized one (or a few) of them were composers of some of the pieces that were performed, when they were each welcomed onstage during the applause after their pieces.
As I’ve said before, that is a fascinating place to be, to be in the room, to sit in the audience with the mind that produced this thing that has never before in human history ever existed. I don’t believe any of them were premieres, but I still wonder what goes through a composer’s head when he or she accepts a bouquet or hears their work of art, that little piece of their mind and heart, perhaps quite personal, and arguably always at least a little bit autobiographical, performed live. Is it as they intended? Is it as they heard or envisioned it? Can it ever be? Or are they too polite to give anything but a nod and a bow?
These were the slightly less musical ideas that were stirred around the evening I went to see the most modern concert I’ve ever attended. I was fascinated and excited to go, and I would go to another one. It’s about the experience.