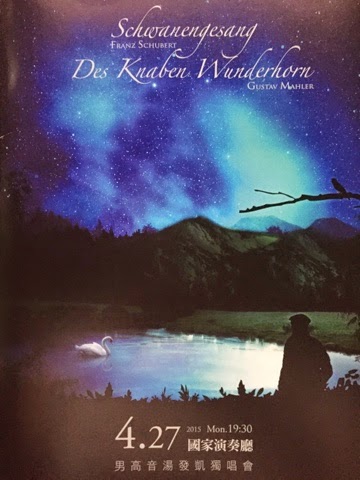 In my write-ups on concerts, I do my best to address the concert and not the pieces themselves, but that’s hard to do in some ways, especially when you’re not super familiar with said pieces.
In any case, last year, I went to see Schoenberg’s Gurrelieder performed by our very fine National Symphony Orchestra. As you dedicated readers will know, it demands some serious forces, and one of those is a tenor. The tenor’s performance (both musically and… acting-ly? dramatically?) was excellent, and I actually ended up making a note of both him and the mezzo-soprano of the evening (who happened to be featured in the recent performance of Mahler 3 under Maestro Inbal where she was, again, outstanding).
I ended up making contact with the performer, and a few months down the road, in the program for April, I saw a familiar name. Well, three familiar names. The first two were ‘Schubert’ and ‘Mahler’, the latter being the one that attracted my interest most readily, but also the Chinese name. It was the aforementioned tenor, and we did end up talking about the recital. I took a few hours off of work to attend, and it fits quite nicely into the end of our three-week teeny Germanic series that began with Beethoven and will terminate with Mahler. So now we have a review of pieces by both of these composers. First is Schubert’s Schwanengesang, followed by Mahler’s Des Knaben Wunderhorn.
I went into the concert with a few thoughts.