Skip to content
or the 2014 concert of the music department of the best music school in Taiwan. 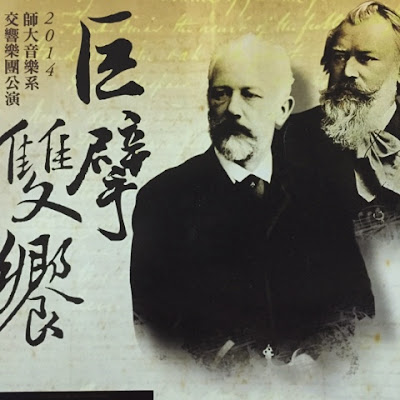 I have kind of a tenuous relationship with this university. It’s the one that a lot of foreigners attend to study Chinese when they move here, but their music department is generally regarded as the best in the country. I took piano lessons for a few years with a frighteningly talented and very friendly student at this university, and have been able to meet and stay in touch with a few others; it’s also like a block away from my office and makes me feel like I know a bit more about what’s going on in the musical scene. All part of the community.
So when I saw they were having their annual concert (perhaps more than one a year?) I was eager to attend. I went the year before and they played Rachmaninoff’s second symphony, and it was quite wonderful. I don’t remember what else was on the program, but I was eager to attend. This year’s program was as follows. 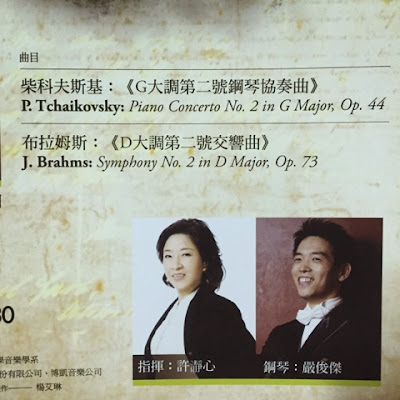 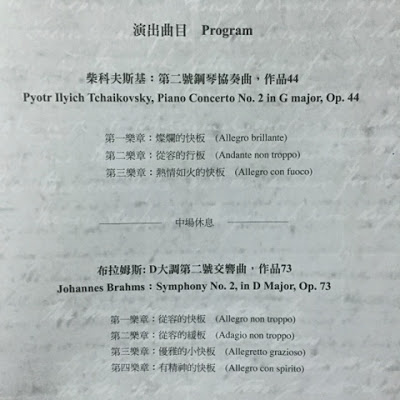 The sharply dressed pianist is my friend’s professor and my coworker’s classmate (perhaps a few years apart…), and the conductor is at least a decade older than she was when that picture was taken. I was most excited to attend because both of the pieces on the program were sort of recent explorations of mine to some degree or other.
I’d actually never heard Tchaikovsky’s second piano concerto, but a few months prior, I’d prepared a write-up on his first piano concerto as well as a write-up of a live performance of the piece here in Taipei by the Taipei Symphony Orchestra. The two pieces are rather interconnected, in some ways. There was a lot of drama surrounding the first, with Rubinstein criticizing it heavily and then coming to love it and being promised the dedication and premiere of the second, so it’s kind of a continuation of that storyline, and I learned a bit about how they’re all connected and how the piece came about, but I’d never heard it. I’d also watched these videos of The Great Stephen Hough speaking about them, which is very informative and interesting. Watch below.

https://youtube.googleapis.com/v/qZMzTp-DbfU&source=uds
It’s hard to talk separately about a piece itself and the performance of said piece when you aren’t really familiar with the piece to begin with. Tchaikovsky’s first is unique and strange and different enough… but the second just seems… strange to me. I don’t want to get into it too much at this point, but it seems to be absolutely all over the place. It’s like the piano and the orchestra take turns speaking, not in dialogue, but as parts of separate conversations. There are a stunning number of solo piano passages, some quite large, that punctuate the piece and leave the orchestra waiting patiently while the pianist thunders away. There’s a string trio section in the (beautiful) second movement, and the third movement is the first that to me, really feels Tchaikovskian.

I can really say I didn’t understand the piece… practically at all. It was confusing, but very intense. All the criticism and confusion aside, the pianist 嚴俊傑 (who appears not to have an English name) tore the life out of the piece. I don’t know if the piece is to be so intense, but it wouldn’t surprise me. I bought tickets on the wrong side of the auditorium, so I couldn’t see his hands on the keys, but I got to stare at his face the whole time. He looks young, well-kempt, and quite handsome, but he was a beast at the piano. The power and energy and focus and drive he had for what really sounds to be a frighteningly challenging piece were unbelievable. I can’t comment with any insight whatsoever about the interpretation, but if his piano virtuosity is any indication of his musical ability and taste, I would imagine his interpretation was spot on. It made me tired by the end. I was a bit disappointed not to have been more familiar with it beforehand, because it seems I was privileged to attend a knockout performance of a rarely performed concerto. Bravo sir, bravo. I am interested in coming to learn more about this piece, and we will definitely discuss it at a later date, but the piece itself (aside from its masterful performance) was puzzling, even compared to the already somewhat unique first piano concerto.
The second piece on the program I had a much more direct relationship with and familiarity of. Brahms’ second symphony was the second installment of our German(ic) Symphonies Series that just wrapped up a few weeks ago. In preparation for that write up, I’d done lots of listening to what really is a delightful and rather easy to understand piece. I really came to love it and this concert came around just shortly after I’d written that installment.
Now… after the concert, I spoke a bit with my piano teacher about my thoughts on the evening. She left at the half, so she was not in attendance for the Brahms piece, but I was reminded of the unfairness of comparing even the best of the best of university orchestras to the recordings with which I familiarized myself a few months ago: Chicago Symphony, Staatskapelle Dresden, Berlin Philharmonic, Concertgebouw, Philharmonia… and it’s a no brainer. I was impressed with the clarity and general performance of the orchestra for the Tchaikovsky piece, but that may have just been because the pianist stole the show. I was more intimately familiar with the Brahms. I don’t know what particular challenges this piece may offer for an orchestra. The ensemble I know is different from last year, with freshmen having come in to fill the seats of those who’d graduated, and I don’t want to be critical. It’s not fair. But I did notice that some of the ensemble had changed during the intermission and people were on stage for the first time that evening, which could have added to unsettled nerves. It’s not just this ensemble; I’ve heard issues with horns in other places too, but there were some horn solo issues in the symphony. It sounded perhaps like general nerves, or even a slight unfamiliarity with the piece. The first two movements were a bit slower than I’d heard in most of my recordings, but the third and fourth were faster, especially the scherzo. I don’t want to be nitpicky, but all in all, it was a good performance from an orchestra who, basically, I’m jealous of every member of. They’re all young and very talented, and in an era where there’s talk of closing orchestras and cancelled seasons and failing record labels, it is comforting to see a full house of friends, family, and fellow students of a top-notch student orchestra to show that, at least in my community, the arts are alive and well. I also got to thinking of the futures of each of the performers. Who’s going to go on to be a great soloist or composer or conductor, who’s going to change majors and do something in ten years entirely unrelated? The opportunities are rich, and it’s a great environment to be in. All I can do is watch and write about it. 加油, my friends.

One thought on “Concert Review: 2014師大音樂系交響樂團公演”